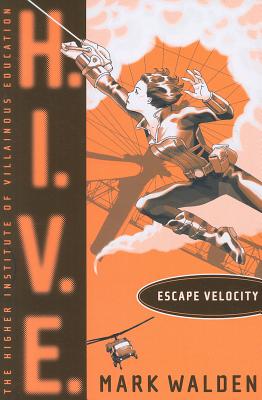 Now in paperback, a riveting installment in an action-packed series.

Students and staff at H.I.V.E.—the Higher Institute of Villainous Education—are horrified to discover that Dr. Nero has been captured by the forces of H.O.P.E.—the Hostile Operative Prosecution Executive—the world’s newest and most ruthlessly efficient security force. Otto decides that the only way to find Nero and the truth behind the lies is to escape H.I.V.E. But he’s also struggling with some newfound abilities: Can he really unconsciously interface with computers without physical contact? And if he can, what exactly do his new powers mean? In his search for answers, Otto must flee H.I.V.E., and take the risks that come with being a rogue agent. Then he just has to break into MI6…..
Mark Walden spent a decade as a video game designer and producer before becoming a fulltime writer and father. He has a BA in English literature and an MA in 20th-century literature, film, and television, both from Newcastle University. He is the author of the H.I.V.E. series and the Earthfall Trilogy and lives with his family in the United Kingdom.