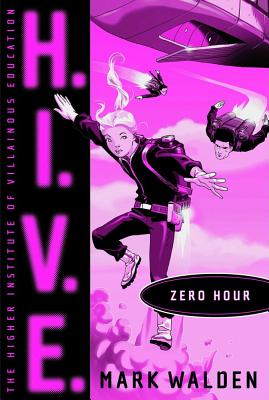 As a final battle with Overlord looms near, the H.I.V.E. heroes are up against an unimaginably dangerous weapon.

Bad news for the Higher Institute of Villainous Education, aka H.I.V.E.: Overlord is reborn and has developed the chilling ability to move from body to body, erasing the host’s personality—and ultimately killing them. Overlord must find Otto, the only host designed to truly contain him, and for that he needs to know the location of H.I.V.E. He also plans to take control of a secret U.S. Army facility that is home to the Autonomous Weapon Program, a computer-controlled system uniquely vulnerable to Overlord’s control.

In the face of these threats, Nero is forced to activate Zero Hour, a plan designed to deal with any member of G.L.O.V.E—the Global League of Villainous Enterprises—who is on the brink of true global domination. Nero also knows that Otto must not be allowed to fall into Overlord’s hands, and a desperate race across the globe begins.
Mark Walden spent a decade as a video game designer and producer before becoming a fulltime writer and father. He has a BA in English literature and an MA in 20th-century literature, film, and television, both from Newcastle University. He is the author of the H.I.V.E. series and the Earthfall Trilogy and lives with his family in the United Kingdom.