When Washington Crossed the Delaware: A Wintertime Story for Young Patriots (Paperback) 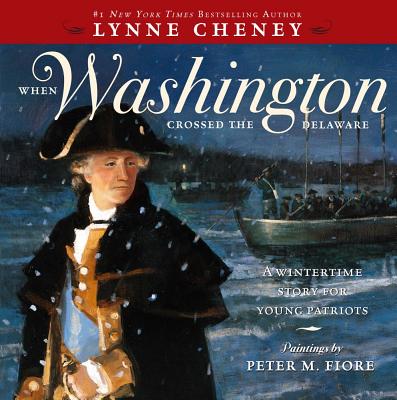 When Washington Crossed the Delaware: A Wintertime Story for Young Patriots (Paperback)


Not On Our Shelves—Ships in 1-5 Days
Now in paperback, Lynne Cheney’s dramatic and New York Times bestselling account of a great leader’s patriotic feat.

Christmas night, 1776, was a troubled time for our young country. In the six months since the Declaration of Independence had been signed, General George Washington and his troops had suffered defeat after defeat at the hands of the British. It looked as though our struggle for independence might be doomed, when Washington made a bold decision. He would lead the main body of his army across the Delaware River and launch a surprise attack on enemy forces.

Washington and his men were going against the odds. It seemed impossible that the ragtag Americans could succeed against the mightiest power in the world. But the men who started across the icy Delaware loved their country and their leader. Under his command they would turn the tide of battle and change the course of history.
Now in paperback for the first time, this story of the military campaign that began on Christmas night in 1776 will teach readers about the heroism, persistence, and patriotism of those who came before them.
Lynne Cheney’s most recent book is the New York Times bestseller, We the People: The Story of Our Constitution, illustrated by Greg Harlin. She is also the author of the New York Times bestsellers America: A Patriotic Primer, A Is for Abigail: An Almanac of Amazing American Women, When Washington Crossed the Delaware: A Wintertime Story for Young Patriots, A Time for Freedom: What Happened When in America, and Our 50 States: A Family Adventure Across America, and has written a memoir, Blue Skies, No Fences. Mrs. Cheney is a senior fellow at the American Enterprise Institute and former chair of the National Endowment for the Humanities. She lives in Washington, DC, with her husband, Vice President Richard B. Cheney.

Peter M. Fiore has illustrated many books for children, including Touching the Sky by Louise Borden and Henry David’s House, edited by Steven Schnur. Mr. Fiore has been interested in art since he was a young boy, and in addition to his book work, he is well known as a fine artist. Mr. Fiore has received many awards and citations for his editorial illustration, including a Silver Medal from the Society of Illustrators. Mr. Fiore lives along the Delaware River in Pennsylvania with his family.