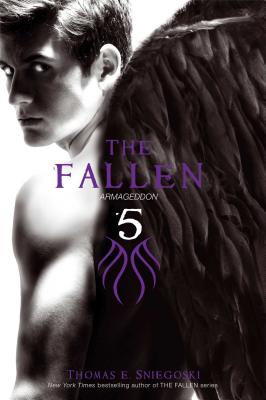 This is book number 5 in the Fallen series.

Only Aaron and his fellow Nephilim can protect the world from Satan’s wrath in this riveting finale to the New York Times bestselling The Fallen series.

Satan is determined to create his own Hell on Earth and has unleashed unfathomable chaos into the world. Cut off from Heaven, humanity’s only hope for salvation rests with eighteen-year-old Aaron and the other Nephilim who fight by his side. These angelic warriors will protect civilization and restore God’s favor no matter the cost. But there can be only one champion—and defeat is eternal.

The battle lines have been drawn. Armageddon is here.
Thomas E. Sniegoski is the author of more than two dozen novels for adults, teens, and children. His books for teens include Legacy, Sleeper Code, Sleeper Agenda, and Force Majeure, as well as the series The Brimstone Network. As a comic book writer, Sniegoski’s work includes Stupid, Stupid Rat Tails, a prequel miniseries to international hit, Bone. Sniegoski collaborated with Bone creator Jeff Smith on the project, making him the only writer Smith has ever asked to work on those characters. He was born and raised in Massachusetts, where he still lives with his wife LeeAnne and their French Bulldog, Kirby. Visit him on the web at Sniegoski.com.