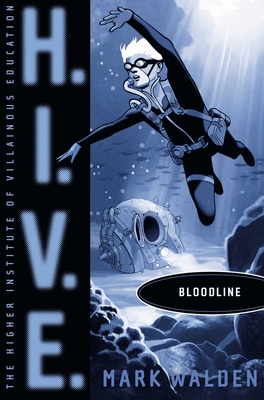 This ninth book in the H.I.V.E. series concludes the high-octane adventures of the supremely talented team of criminals.

As the students of H.I.V.E. face the challenges of their final year at the school, Otto Malpense is forced to confront his own legacy as a new threat rises from the shadows of his past.

Nothing will ever be the same again as Otto races against the clock to rescue his friends from a rival organization. But as Otto desperately fights for his friends’ lives, he ends up facing a deadly enemy more dangerous and powerful than any he’s faced ever before—an enemy who’s a twisted product of his own bloodline.

From Italy to Russia to the United States, Bloodline is a real tour de force, and a fitting conclusion to the acclaimed H.I.V.E series.
Mark Walden spent a decade as a video game designer and producer before becoming a fulltime writer and father. He has a BA in English literature and an MA in 20th-century literature, film, and television, both from Newcastle University. He is the author of the H.I.V.E. series and the Earthfall Trilogy and lives with his family in the United Kingdom.