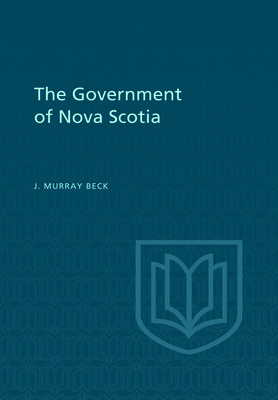 Here is a well-documented study of the structure, historical development, and present condition of the government of Nova Scotia. It deals with one of the oldest constitutions in Canada, one which was not created by statute but by the prerogative of the Crown.

Nova Scotia has two major claims to priority in the history of Canadian politics: she was the first province to be granted representative institutions and the first to win responsible government. Owing in large measure to Joseph Howe's inspired leadership, the latter was achieved through peaceful, constitutional means. It is obvious that a study of the government of Nova Scotia must dig deep into the past, and Dr. Beck has investigated this early history with great care and thoroughness. This is followed by a study of the more recent period and the working of the government of our own time. The author demonstrates that the important changes, the interesting practices, and the colourful incidents have not all been in the distant past. There was, for example, the Legislative Council, that travesty on democratic institutions which lasted until less than thirty years ago. There was the odd phenomenon of a Liberal government in power for seventy out of ninety years since Confederation. There was the constant need to adapt parliamentary practices and institutions, developed under quite different conditions to the needs of a much smaller community, and one which was keenly aware of its heritage and very jealous of any serious interference.

As a native of Nova Scotia and a political scientist, Dr. Beck has had a special interest in seeing how the Nova Scotian institutions of government evolved and how they work today. He has done a great deal of original research among primary sources and covered a field as yet uninvestigated by any other scholar. An admirable addition to the Canadian Government Series, of which it is the eighth volume, this is a book for serious students of political science and for students of Nova Scotia history.