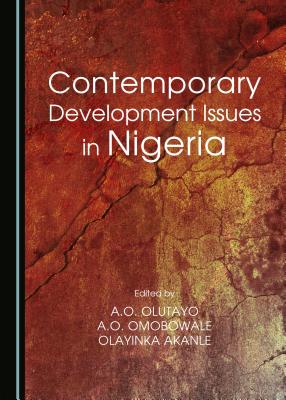 
Special Order—Subject to Availability
(This book cannot be returned.)
A.O. Olutayo, PhD, is a Professor at the Department of Sociology in the Faculty of the Social Sciences of the University of Ibadan, where he is currently Dean of Faculty, and was previously the Head of the Department. He has published widely in various journals, contributed to several edited volumes, and authored and co-authored numerous books. A.O. Omobowale holds a PhD in Sociology from the University of Ibadan. His research interests include development, cultural, rural, political, medical, and urban studies. He was awarded the University of Ibadan Postgraduate School Award for scholarly publication in 2007, an IFRA (French Institute for Research in Africa) Research Fellowship in 2009, and an American Council of Learned Societies African Humanities Programme Post-Doctoral Fellowship in 2010, and was an African Studies Association Presidential Fellow in 2014. Olayinka Akanle received his PhD degree in Sociology from the University of Ibadan, Nigeria, where he currently works as a Lecturer. Dr Akanle is the recipient of numerous scholarly awards, including the University of Ibadan Postgraduate School Prize for best publication, and has been granted the titles of World Social Science Fellow (WSSF) by the International Social Science Council (ISSC) and Laureate of the Council for the Development of Social Science Research in Africa. His research interests include the sociology of development, rural sociology, migration and diaspora studies, and the role of the family in post-colonial Africa.