On a Sea of Glass: The Life & Loss of the RMS Titanic (Paperback) 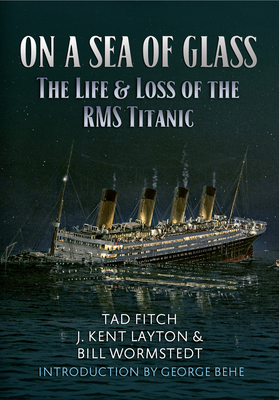 On a Sea of Glass: The Life & Loss of the RMS Titanic (Paperback)


Not On Our Shelves—Ships in 1-5 Days
On the night of 14/15 April 1912, a brandnew, supposedly unsinkable ship, the largest and most luxurious vessel in the world at the time, collided with an iceberg and sank on her maiden voyage. Of the 2,208 people on board, only 712 were saved. The rest either drowned or froze to death in the icy-cold waters of the North Atlantic. How could this ‘unsinkable’ vessel sink and why did so few of those aboard survive?The authors bring the tragedy to life, telling the story of the ship’s design, construction and maiden voyage. The stories of individuals who sailed on her, many previously known only as names on yellowing passenger and crew lists, are brought to light using rarely-seen accounts of the sinking. The stories of passengers of all classes and crewmembers alike, are explored. They tell the dramatic stories of lives lost and people saved, of the rescue ship Carpathia, and of the aftermath of the sinking. Never again would a large passenger liner sail without lifeboats for all.Despite the tragedy, the sinking of the Titanic indirectly led to untold numbers of lives being saved due to new regulations that came into force after the tragedy. Profusely illustrated, including many rare and unique views of the ship and those who sailed on her, this is as accurate and engrossing a telling of the life of the White Star Line’s Titanic and her sinking as you will read anywhere. Made special by the use of so many rare survivor accounts from the eye witnesses to that night to remember, the narrative places the reader in the middle of the maiden voyage, and brings the tragic sinking to life as never before.
Tad Fitch has researched the Titanic and maritime history for over two decades. He has written numerous articles related to Titanic that have been published in the Titanic Historical Society’s journal The Titanic Commutator, and online at Bill Wormstedt’s Titanic and Encyclopedia Titanica. He, along with George Behe and Bill Wormstedt, coauthored the landmark article “Titanic: The Lifeboat Launching Sequence Re-Examined”. He was a co-author of Report Into the Loss of SS Titanic: A Centennial Reappraisal. Tad was born in northeast Ohio, and works in the field of psychology. When not writing, he enjoys scuba diving and training in taekwondo.J. Kent Layton has studied the history of the great Atlantic liners for over three decades. His books bring together, for the first time, many fabulous images, from numerous collections around the world to complement his outstanding research on the great Atlantic vessels. He is an active member of the Titanic Research & Modelling Association and lives in Central New York State. He lives in the Finger Lakes region of Central New York, and divides his time between his writing and his work as a piano tuner.Bill Wormstedt first became interested in the Titanic after reading Walter Lord’s A Night to Remember in junior high school. He discovered the online Titanic community in 1995, and soon started commenting and writing about the Titanic, and his articles have been published in THS’s The Titanic Commutator, Encyclopedia Titanica, and his own web-site, Bill Wormstedt’s Titanic. With Tad Fitch and George Behe, he co-wrote The Lifeboat Launching Sequence Re-Examined, and is one of 11 co-authors of Report Into the Loss of SS Titanic: A Centennial Reappraisal. Bill is a computer programmer who lives and works in Seattle, Washington.