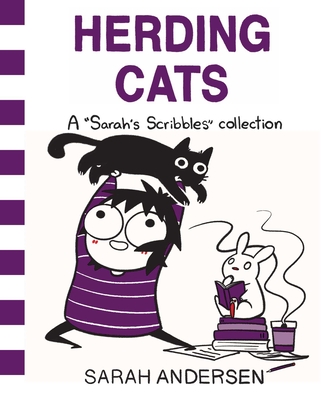 
Not On Our Shelves—Ships in 1-5 Days
The delightful third installment of Sarah's Scribbles by Sarah Andersen, winner of three consecutive Goodreads Choice Awards for Best Graphic Novels & Comics

". . . author Sarah Andersen uses hilarious (and adorable) comics to illustrate the very specific growing pains that occur on your way to becoming a mature, put-together grownup. Andersen’s spot-on illustrations also show how to navigate this newfound adulthood once you arrive, since maturity is equally as hard to maintain as it is to find … "
--The Huffington Post

Sarah valiantly struggles with waking up in the morning, being productive, and dealing with social situations. Sarah's Scribbles is the comic strip that follows her life, finding humor in living as an adulting introvert that is at times weird, awkward, and embarrassing. The third collection of Sarah's Scribbles comics includes never-before-published comics and an illustrated essay about struggles with sexism, personal growth, and the rewards and challenges of sharing your creative work with millions of readers online.
Sarah Andersen’s debut book, Adulthood is a Myth, was the 2016 Goodreads Choice Award Winner for Graphic Novels and Comics. She also won the award for Big Mushy Happy Lump in 2017, and Herding Cats in 2018. Her graphic novel Fangs was nominated for an Eisner Award and appeared on The New York Times best seller list.

Sarah Andersen is a cartoonist and illustrator in her twenty-somethings. She graduated from the Maryland Institute College of Art in 2014 and currently lives in Portland, Oregon. Her semi-autobiographical comic strip, Sarah’s Scribbles, finds the humor in living as an introvert with beloved pets and the continual struggles with waking up in the morning, being productive, and dealing with social situations.