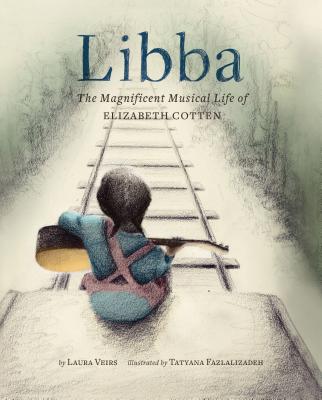 
In Stock—Click for Locations
This lyrical, loving picture book from popular singer-songwriter Laura Veirs and debut illustrator Tatyana Fazlalizadeh tells the story of the determined, gifted, daring Elizabeth Cotten—one of the most celebrated American folk musicians of all time.

Elizabeth Cotten was only a little girl when she picked up a guitar for the first time. It wasn't hers (it was her big brother's), and it wasn't strung right for her (she was left-handed). But she flipped that guitar upside down and backwards and taught herself how to play it anyway. By age eleven, she'd written "Freight Train," one of the most famous folk songs of the twentieth century. And by the end of her life, people everywhere—from the sunny beaches of California to the rolling hills of England—knew her music.

★ "The message of never giving up on a dream, no matter the circumstances, will resonate deeply with readers—purchase for all picture book biography collections." —School Library Journal, starred review

★ "An inspiring tale of an artist." —Kirkus Reviews, starred review

★ "Elegant and moving."—Publishers Weekly, starred review
Laura Veirs is a singer-songwriter and longtime fan of Elizabeth Cotten. This is her first picture book. She lives in Portland, Oregon.

Tatyana Fazlalizadeh is based in Brooklyn, New York, and is an artist and activist. This is her first picture book.
"A strong picture-book biography profiling a notable African American musician and songwriter."- Booklist

"An inspiring tale of an artist who came into her own later in life."-Kirkus Reviews, starred review

"The message of never giving up on a dream, no matter the circumstances, will resonate deeply with readers."-School Library Journal, starred review

"Fazlalizadeh's art . . . complements Veirs's unpretentious prose exquisitely, and the interplay between the two is seamless. . . . Should inspire young readers starting to pursue their own creative talents as well as the adults who share the book with them." -The Horn Book Magazine

"What a wonderful tribute to an amazing and talented woman."-Laura Vaccaro Seeger, author of the Caldecott honor-winning books Green and First the Egg

"This is a beautiful book for late bloomers." -- Bookish

"A tale of music, determination, and kindness in language simple enough for early readers and lively enough to make it a good choice for read-aloud -- and maybe a sing-along or two." --Common Sense Media

"An utterly fresh take on a holiday tradition that can seem too mushy and too-commercial." --Common Sense Media