Fox & Chick: The Sleepover: and Other Stories (Hardcover) 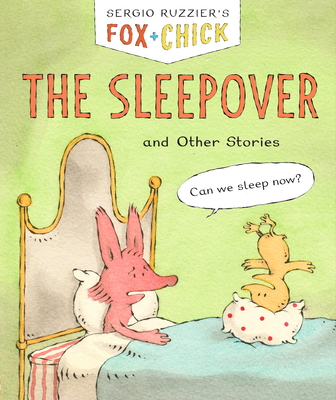 Fox & Chick: The Sleepover: and Other Stories (Hardcover)


In Stock—Click for Locations
Fox and Chick are back in this newest book in the hilarious early reader series by Geisel Honoree Sergio Ruzzier.

In the tradition of Frog and Toad, this critically acclaimed early reader series features Fox and Chick – two unlikely friends who despite their differences always manage to find a way to get along. In this third book in the series, Fox and Chick have a sleepover, search for a lost hammer and throw a surprise party that unexpectedly surprises everyone. The universal characters, humor and comic-style layouts make it ideal for both the picture book audience and emerging readers.

• BUDDY BOOKS ARE PERENNIAL: From Frog and Toad to Elephant & Piggie to Ivy & Bean, kids of all ages respond to books about friendship.
• PERFECT FOR NEW READERS: The universal characters, humor, and comic-style layouts make it ideal for both the picture book audience and emerging readers.
• AWARD-WINNING: The first book in the series won a Geisel Award Honor for "the most distinguished book for beginning readers" by the American Library Association. It was also a New York Times Notable Children's Book and appeared on many Best Book of the Year lists.
• KIDS LIKE GRAPHIC NOVELS: This series will appeal to kids who are visually oriented readers as well as new readers who are eager to tackle graphic novels.

• Parents, caregivers, and grandparents
• Teachers and librarians
• Fans of Frog and Toad, Elephant & Piggie, Bink & Gollie, Charlie & Mouse, and Barkus
Sergio Ruzzier is a Sendak Fellow who has written and illustrated many critically acclaimed children's books. Born in Milan, Italy, he now divides his time between Brooklyn, New York, and the Apennine Mountains in Italy.
"In pleasing and often amusing illustrations, Ruzzier uses the conventions of comics (visual narrative sequences, speech balloons) to motivate beginning readers with the dual reward of verbal and visual humor. Original storytelling with quirky, character-driven humor."-Booklist

"Following their wacky antics in the previous two volumes (The Party and Other Stories, rev. 7/18; The Quiet Boat Ride and Other Stories, rev. 7/19), this charmingly mismatched pair returns for three more stories. . . . The offbeat tales told through comic panel art and colorful settings, combined with the excitable, bossy Chick and the easygoing, sensible Fox, create another installment in this comics-style picture book series that works for readers and listeners alike."-The Horn Book Magazine