The Joker Psychology: Evil Clowns and the Women Who Love Them Volume 12 (Paperback) 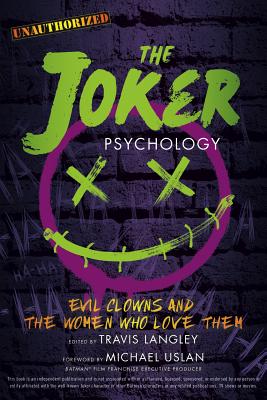 The Joker Psychology: Evil Clowns and the Women Who Love Them Volume 12 (Paperback)


Special Order—Subject to Availability
A fun, frightening, and always fascinating look into the psyche of a madman: the Clown Prince of Crime, the Harlequin of Hate--The Joker Since he first fought Batman in 1940, The Joker has evolved into one of popular culture's most complex and confounding psychological creations: both a criminal mastermind and an unhinged psychopath now starring in his own film. In The Joker Psychology: Evil Clowns and the Women Who Love Them, Dr. Travis Langley, author of the bestselling Batman and Psychology, returns to Gotham City to explore the twisted psyche of this great supervillain, as well as the personalities who are inexorably drawn to it. Paying special attention to the strange dynamics of relationships like the one between The Joker and Harley Quinn, this collection of 15 chapters (including some very special interviews with the people who brought The Joker and Harley Quinn to life in comics and onscreen), this collection analyzes:
Travis Langley, PhD, authored the acclaimed book Batman and Psychology: A Dark and Stormy Knight. He is the series editor for the Popular Culture Psychology series, including The Walking Dead Psychology, Wonder Woman Psychology, and Captain America Vs. Iron Man (with foreword by Stan Lee) along with looks at Star Wars, Star Trek, Game of Thrones, Supernatural, Doctor Who, Daredevil, Westworld, and more. A distinguished professor of psychology at Henderson State University, he teaches on the psychology of crime, mental illness, media, and social behavior. He lives in AR.