The Mysterious Key And What It Opened (Paperback) 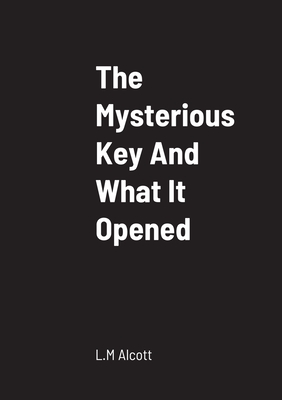 The Mysterious Key And What It Opened (Paperback)


Not On Our Shelves—Ships in 1-5 Days
(This book cannot be returned.)
The Mysterious Key And What It Opened By Louisa May AlcottTrevlyn lands and Trevlyn gold, Heir nor heiress e'er shall hold, Undisturbed, till, spite of rust, Truth is found in Trevlyn dust. "This is the third time I've found you poring over that old rhyme. What is the charm, Richard? Not its poetry I fancy." And the young wife laid a slender hand on the yellow, time-worn page where, in Old English text, appeared the lines she laughed at. Richard Trevlyn looked up with a smile and threw by the book, as if annoyed at being discovered reading it. Drawing his wife's hand through his own, he led her back to her couch, folded the soft shawls about her, and, sitting in a low chair beside her, said in a cheerful tone, though his eyes betrayed some hidden care, "My love, that book is a history of our family for centuries, and that old prophecy has never yet been fulfilled, except the 'heir and heiress' line. I am the last Trevlyn, and as the time draws near when my child shall be born, I naturally think of his future, and hope he will enjoy his heritage in peace." "God grant it " softly echoed Lady Trevlyn, adding, with a look askance at the old book, "I read that history once, and fancied it must be a romance, such dreadful things are recorded in it. Is it all true, Richard?" "Yes, dear. I wish it was not. Ours has been a wild, unhappy race till the last generation or two. The stormy nature came in with old Sir Ralph, the fierce Norman knight, who killed his only son in a fit of wrath, by a blow with his steel gauntlet, because the boy's strong will would not yield to his." "Yes, I remember, and his daughter Clotilde held the castle during a siege, and married her cousin, Count Hugo. 'Tis a warlike race, and I like it in spite of the mad deeds." "Married her cousin That has been the bane of our family in times past. Being too proud to mate elsewhere, we have kept to ourselves till idiots and lunatics began to appear. My father was the first who broke the law among us, and I followed his example: choosing the freshest, sturdiest flower I could find to transplant into our exhausted soil." "I hope it will do you honor by blossoming bravely. I never forget that you took me from a very humble home, and have made me the happiest wife in England." "And I never forget that you, a girl of eighteen, consented to leave your hills and come to cheer the long-deserted house of an old man like me," returned her husband fondly.