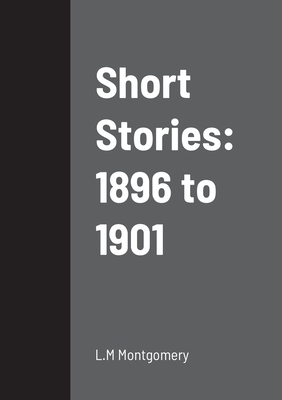 
Not On Our Shelves—Ships in 1-5 Days
(This book cannot be returned.)
Short Stories Lucy Maud MontgomeryThe land dropped abruptly down from the gate, and a thick, shrubby growth of young apple orchard almost hid the little weather-grey house from the road. This was why the young man who opened the sagging gate could not see that it was boarded up, and did not cease his cheerful whistling until he had pressed through the crowding trees and found himself almost on the sunken stone doorstep over which in olden days honeysuckle had been wont to arch. Now only a few straggling, uncared-for vines clung forlornly to the shingles, and the windows were, as has been said, all boarded up. The whistle died on the young man's lips and an expression of blank astonishment and dismay settled down on his face-a good, kindly, honest face it was, although perhaps it did not betoken any pronounced mental gifts on the part of its owner. "What can have happened?" he said to himself. "Uncle Tom and Aunt Sally can't be dead-I'd have seen their deaths in the paper if they was. And I'd athought if they'd moved away it'd been printed too. They can't have been gone long-that flower-bed must have been made up last spring. Well, this is a kind of setback for a fellow. Here I've been tramping all the way from the station, athinking how good it would be to see Aunt Sally's sweet old face again, and hear Uncle Tom's laugh, and all I find is a boarded-up house going to seed.S'pose I might as well toddle over to Stetsons' and inquire if they haven't disappeared, too." He went through the old firs back of the lot and across the field to a rather shabby house beyond. A cheery-faced woman answered his knock and looked at him in a puzzled fashion. "Have you forgot me, Mrs. Stetson? Don't you remember Lovell Stevens and how you used to give him plum tarts when he'd bring your turkeys home?" Mrs. Stetson caught both his hands in a hearty clasp. "I guess I haven't forgotten " she declared. "Well, well, and you're Lovell I think I ought to know your face, though you've changed a lot. Fifteen years have made a big difference in you. Come right in. Pa, this is Lovell-you mind Lovell, the boy Aunt Sally and Uncle Tom had for years?" "Reckon I do," drawled Jonah Stetson with a friendly grin. "Ain't likely to forget some of the capers you used to be cutting up. You've filled out considerable. Where have you been for the last ten years? Aunt Sally fretted a lot over you, thinking you was dead or gone to the bad." Lovell's face clouded. "I know I ought to have written,