Captain Fitz: Fitzgibbon, Green Tiger of the War of 1812 (Canadians at War #7) (Paperback) 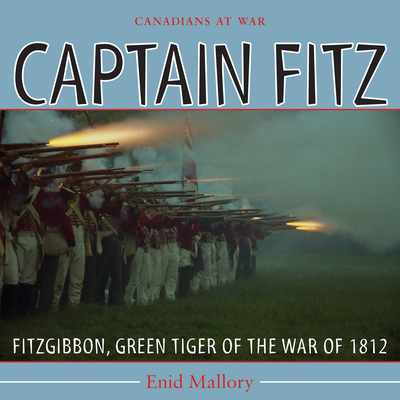 Captain Fitz: Fitzgibbon, Green Tiger of the War of 1812 (Canadians at War #7) (Paperback)

The name James FitzGibbon struck terror in the hearts of U.S. soldiers and this is the dramatic story of his life and his daring exploits.

Irish-born James FitzGibbon came to Canada with the 49th Regiment to serve under his hero, Major-General Sir Isaac Brock. After the death of Brock at Queenston Heights and the capture of Fort George in the War of 1812, FitzGibbon spied on the enemy encampment, disguised as a settler selling butter. Armed with his intelligence report, the British launched a surprise night attack, and the Americans were forced to retreat.

With his hand-picked band of Green Tiger guerrillas, Fitz fought to stop the U.S. raiding parties. Laura Secord alerted him to an impending attack at Beaver Dams, and with his 50 men and the support of First Nations warriors, he bluffed the 500-strong American Army into surrender.

Captain Fitz is full of action: battles on land and lakes, the burning of York (Toronto), the drama of 6,000 American soldiers moving downriver to attack Montreal, only to be defeated at Crysler's Farm. As well as the pageantry, there's the misery, suffering, and hunger for honour and glory all part of the War of 1812.

Enid Swerdfeger Mallory grew up near the St. Lawrence River and saw the ghosts of Canadian history passing by. She attended Queen's University, became a social worker and then a librarian, but always a writer. Her previous books include Coppermine: The Far North of George M. Douglas and Robert Service: Under the Spell of the Yukon. She lives in Peterborough, Ontario.