Laws of Chaos: Invariant Measures and Dynamical Systems in One Dimension (Probability and Its Applications) (Paperback) 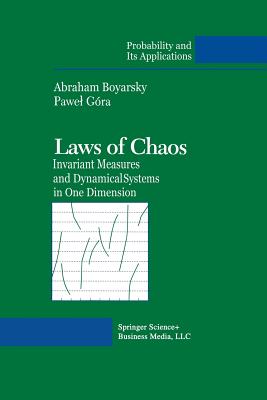 Laws of Chaos: Invariant Measures and Dynamical Systems in One Dimension (Probability and Its Applications) (Paperback)


Not On Our Shelves—Ships in 1-5 Days
A hundred years ago it became known that deterministic systems can exhibit very complex behavior. By proving that ordinary differential equations can exhibit strange behavior, Poincare undermined the founda- tions of Newtonian physics and opened a window to the modern theory of nonlinear dynamics and chaos. Although in the 1930s and 1940s strange behavior was observed in many physical systems, the notion that this phenomenon was inherent in deterministic systems was never suggested. Even with the powerful results of S. Smale in the 1960s, complicated be- havior of deterministic systems remained no more than a mathematical curiosity. Not until the late 1970s, with the advent of fast and cheap comput- ers, was it recognized that chaotic behavior was prevalent in almost all domains of science and technology. Smale horseshoes began appearing in many scientific fields. In 1971, the phrase 'strange attractor' was coined to describe complicated long-term behavior of deterministic systems, and the term quickly became a paradigm of nonlinear dynamics. The tools needed to study chaotic phenomena are entirely different from those used to study periodic or quasi-periodic systems; these tools are analytic and measure-theoretic rather than geometric. For example, in throwing a die, we can study the limiting behavior of the system by viewing the long-term behavior of individual orbits. This would reveal incomprehensibly complex behavior. Or we can shift our perspective: Instead of viewing the long-term outcomes themselves, we can view the probabilities of these outcomes. This is the measure-theoretic approach taken in this book.