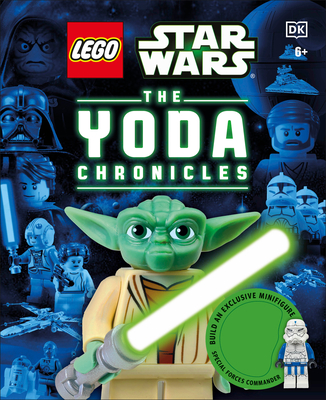 Relive Yoda's adventures in the LEGO® Star Wars® galaxy with this all new format from DK.

The first in a brand-new series, LEGO Star Wars: The Yoda Chronicles features themed spreads based on the legendary Yoda's adventures, from his leadership of the Jedi council and his duels with Count Dooku and Darth Sidious, to his support of the Wookiees in the Clone Wars and his training of Luke on Dagobah. Specially commissioned photography shows minifigures and vehicles in action, with tons of storylines and facts that kids will love.

Daniel Lipkowitz is a senior writer and story developer at the LEGO Group. His writing has appeared in LEGO Club Magazine as well as LEGO Master Builder Academy, and his characters and storylines regularly appear in new LEGO themes and animated LEGO films. He is the author of The LEGO Ideas Book, LEGO Awesome ideas, and Lego Play Book: Ideas to Bring Your Bricks to Life.
"[T]his hardcover is wholly focused on our petite green friend, providing facts and awesome pictorials showcasing Yoda training Luke on Dagobah, befriending Wookiees and more." – USA Today's Pop Candy blog