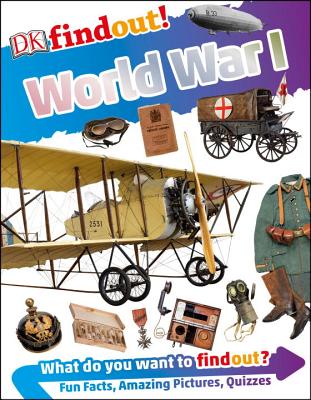 
Not On Our Shelves—Ships in 1-5 Days
This photo-filled book for kids ages 6–9 is the ultimate guide to the key facts, figures, and players of World War I. Educating young readers through a combination of close-up images, trivia facts, quiz questions, and fascinating tidbits, it’s the perfect book for any kid who wants to learn more about military history.

How did World War I start? Which statue was damaged in the lead-up to the United States entering the war? Which countries had the biggest army and the best weapons? Find out the answers to these questions and more in DKfindout! World War I, which features photographs and illustrations of war machines, battlefields, and world leaders from throughout the span of this widespread conflict. Readers will learn about both sides of the war—the Central Powers and the Allied Powers—as well as each country’s motivation for entering the conflict. Sections on military strategy and life during the war delve deeper into central subtopics, and detail how advancements in military technology like tanks and chemical weapons changed the course of battles all across the European continent.

Vetted by educational consultants, the DKfindout! series drives kids ages 6–9 to become experts on more than 30 of their favorite STEM- and history-related subjects, whether Vikings, volcanoes, or robots. This series covers the subjects that kids really want to learn about—ones that have a direct impact on the world around them, like climate change, space exploration, and rapidly evolving technology—making learning fun through amazing images, stimulating quizzes, and cutting-edge information. The DKfindout! series is one that kids will want to turn to again and again.
Author Brian Williams is a former teacher and history writer of more than 200 books for children.

Consultant Simon Adams worked as an editor of children's reference and other nonfiction books before becoming a full-time writer. He has written and contributed to more than fifty books on subjects as varied as the sinking of the Titanic, the two world wars, and the history of jazz.

Trusted by parents, teachers, librarians, and kids across the world, DK is an award-winning publisher of visual reference books for children, including the DK Eyewitness Books, DK findout!, and Maker Lab series. DK books combine clear photography and illustration with expert text to show you what others only tell you.
“High-interest topics, an abundance of eye-catching photos and visuals, and accessible text are a mainstay of DK titles, and the entries in this DK findout! series are no exception” –Booklist

“Filled with the beautiful photographs that DK is known for, plus a multitude of facts, prepare to not see your child for a few hours as they pore over these gorgeous books.” –Brightly