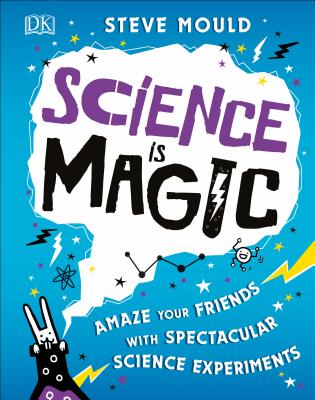 Join comedian and author Steve Mould, #1 bestselling author of How to be a Scientist, and learn the secrets behind some of the most famous magic tricks and illusions (and learn some of your own).


Learn how to bend water with a balloon, turn water into juice, make a glass beaker disappear in oil, and wow your friends with levitating tinsel! Packed with optical illusions, pranks, and fun facts, this book is a must-have for any aspiring scientist or magician (the two aren't as different as you might think)!

Each trick is explained using step-by-step photographs, and the science behind each one is showcased clearly and simply. Sprinkled throughout the book are profiles of famous magicians and illusionists, such as Harry Houdini and David Blaine, and stories of how they used science to create their most famous tricks.

Science is Magic is the perfect addition to any family bookshelf or classroom, putting a fresh spin on science for kids. What's fantastic about this kids’ activity book is that many of the magic tricks or experiments are something you learn to perform on a friend and require practice. Thus, (the genius bit) it’s not something kids will just do once and then turn the page.

Think Magic Is Just An Illusion?

Learn some amazing experiments to wow your friends, find out how magicians use science in their most famous tricks, and discover the magic of the world around you.

Packed with activities for kids from magic tricks to optical illusions, and peppered with fascinating facts, this educational book is a must-have for scientists and magicians alike. Added bonus, each ‘trick’ or experiment in the book uses simple items that can be grabbed from home or a hardware store.

Get ready to wow your friends with some cool science-backed magic like:

Add other fun-filled Steve Mould titles in the DK collection to your bookshelves, like How To Be A Scientist and The Bacteria Book.
Steve Mould is a science expert and comedian with a physics degree from the University of Oxford. He has a YouTube channel with over 200,000 subscribers, and his videos regularly achieve hits in the hundreds of thousands. One of these videos (about "self-siphoning beads") went viral worldwide, gaining nearly 2 million hits and being mentioned in The New York Times and on the BBC. Scientists later discovered why the beads performed in the mysterious way they did and dubbed it "The Mould Effect." Steve also hosts a radio show on BBC Radio 4 and is part of the live comedy/science trio Festival of the Spoken Nerd.

Steve's previous books for kids include How to Be a Scientist (a 2018 ILA-CBC Children's Choices Reading List selection) and The Bacteria Book.