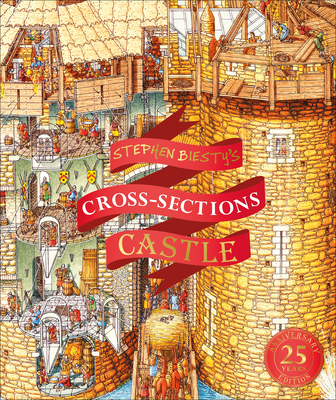 
In Stock—Click for Locations
History comes alive in this incredible children's illustrated book about castles.

Slicing through different areas of a medieval fortress, extraordinary views reveal the people busy inside, preparing for battle as an enemy army approaches.

Packed with facts, you'll find out what it takes to build a massive 14th-century castle, dress a knight in armor, or prepare a feast fit for a king or queen. From the drawbridge to the dungeon, Cross-Sections Castle swarms with the people who keep the castle going--the workers, craftsmen, and servants. And, as you pore over every page, look out for the villainous spy. Is he in the well... the keep... the moat? No? Keep looking, he's there somewhere!

Back in print after 20 years, you can now cheer on jousters, be entertained by a troubadour, and witness the gory details of a traitor's demise. This unique illustrated book for kids is not just the story of a castle; it brings medieval history to life.
Richard Platt has published more than 100 books, 32 of which were for DK. He has written on almost every topic you can imagine, but is particularly interested in the history of science and technology, and social history. He has become a bit of an amateur expert on the subject of life at sea, smuggling, and piracy. Most of his books are illustrated information books for children, but he has also written stories for children and several for adults. Some have won prizes, including the Smarties silver prize, and a Blue Peter award. Richard also writes TV scripts and museum interpretation, and he has appeared on TV and radio.

Stephen Biesty is a world-renowned British illustrator. He made his name in the 1990s for his best-selling Incredible Cross-Section books published by Dorling Kindersley, which have topped global sales of 3.5 million and have been printed in 16 languages. He has won several prestigious prizes, including the New York Times Best Illustrated Book Award in 1993, and the UK Literary Association Children's Book Award in 2004. Stephen has created illustrations for high-profile architectural projects, such as the Millennium Dome in 1999 and the redevelopment of the Royal Opera House in 2000. He has also worked on digital media projects such as an animated film for an exhibition at Tower Bridge in 2009, and a website for the USS Constitution Museum in Boston in 2010 to celebrate the bicentennial of this famous American warship.