An Hour Over Denali (Paperback) 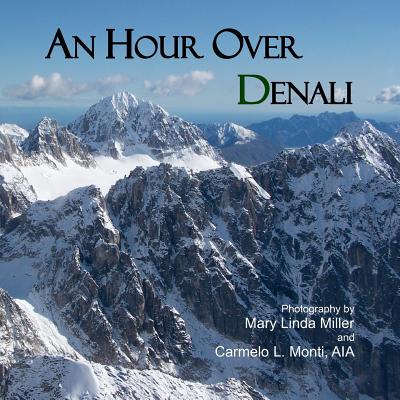 An Hour Over Denali (Paperback)


Not On Our Shelves—Ships in 1-5 Days
(This book cannot be returned.)
Two amateur photographers were in the right place at the right time. While Denali National Park is often smothered with clouds and drenched with rain in August, a climatological anomaly placed a narrow ridge of dry warm air across the state of Alaska, bringing clear, mist-free air to the mountains. On a flight-seeing tour of a lifetime, Mary Linda Miller and Carmelo Monti captured in an hour sunlit views that might otherwise require numerous trips to see. From the Talkeetna River to Mount McKinley, with two cameras facing in opposite directions, their images reveal vast expanses of boreal forest, marshes, streams and lakes; glaciers of every size and shape, from origins to terminus; and worn-smooth foothills rising to the crescendo of the tallest snowcapped peaks in North America. "An Hour Over Denali" contains a collection of 75 time-stamped aerial photographs taken on August 11, 2011 during a flight-seeing tour over Denali National Park and Denali State Park; an introduction that describes the process in greater detail; a map that defines the flight-seeing route; and descriptions of the photos that tie them to their locations.
Mary Linda Miller Reared in St. Louis, Missouri, Mary Linda Miller graduated summa cum laude with a Bachelor of Fine Arts degree from Maryville University in 1978. She worked for twenty-five years doing design, drafting, and technical writing in the fields of civil engineering and architecture while living in St. Louis, Phoenix, Arizona, and Kaneohe, Hawaii. After learning darkroom technique as part of her college curriculum, she continued her interest in black and white photography in a private darkroom as a creative outlet. She also traveled extensively in the United States, Western Europe, and Japan, taking photographs everywhere she went. Mary currently resides in Orlando, Florida, USA, with her husband and fellow photographer Carmelo L. Monti, AIA. Their son Jason resides in Otoba, Japan, where he teaches English to fifth and sixth grade students. Visit her website www.marylindamiller.com for information about her other publications. Carmelo L. Monti, AIA Reared in St. Louis, Missouri, Carmelo L. Monti, AIA, NCARB, graduated with honors with a Bachelor of Science degree in Architecture and Urban Design from the University of Kansas in 1972. His college curriculum included a course in architectural photography. He worked for thirty-nine years in architecture while living in St. Louis, Phoenix, Arizona, and Kaneohe, Hawaii. He also traveled extensively in the United States and Japan, taking photographs everywhere he went. He currently resides in Orlando, Florida, USA, with his wife, author Mary Linda Miller, where he continues to practice architecture and where some of his political cartoons have appeared in the Orlando Sentinel newspaper. His rendered illustrations appear in the children's book Terry Trackhoe Goes Missing. Visit www.terrytrackhoe.com for photos taken by these two photographers of the real Terry Trackhoe and his friends on their construction site. Photographs of Japan taken by Carmelo and Mary in 2007 illustrate the limited edition anthology Rainbow Lights Ablaze.