The Life of An American Jew in Israel: Benjamin H. Freedman-in His Own Words (Paperback) 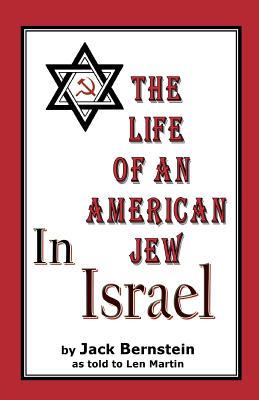 The Life of An American Jew in Israel: Benjamin H. Freedman-in His Own Words (Paperback)


Not On Our Shelves—Ships in 1-5 Days
(This book cannot be returned.)
The Life of An American Jew in Israel (Jack Bernstein) AND Benjamin H. Freedman - In His Own Words is a concise compilation of historic documents which are no longer available in hardcopy. They unanimously REVEAL(ation) a heretical conspiracy, NOT of the Jews, but of Zionism. (See Important Note below)

Historically, no nation or kingdom has ever "gone down" spontaneously - without premeditation. Empires only fall after careful and strategic, covert planning by someone. Sagas in antiquity tell of precious few occasions when the scheme has been discovered and subsequently thwarted.

Whether you are a Democrat, Republican, Libertarian or an Independent, if you are concerned about the immediate future of the United States of America, you will read this eye-opening little book and take the passionate warnings of these valiant men seriously. Many things will then begin to make dreadful sense to you.

Jack Bernstein was a patriotic American who leaped on the Zionist propaganda bandwagon of diaspora Jews returning to Israel. He became greatly disillusioned and alarmed by his personal experiences in Israel and the discovery of the true nature of Zionism as a political movement seeking to establish a supranation of Israel (Judaism, however, is a non-aggressive religion)

Having returned to the sanctuary of America, and with the help of journalist Len Martin, he authored a book in 1984 attempting to expose the truth and warn the American public. He joined the ranks of other courageous Jews who had for decades also been trying to notify the nation as to the very real and present danger of covert Zionist forces at work within the upper echelons of the political and financial affairs of America. Many of these heroic watchmen were wealthy and prominent celebrities including Albert Einstein and Benjamin Freedman.

Albert Einstein was an early Zionist who believed in Jews worldwide being allowed to return to their ancestral land of Palestine as an asylum from persecution and/or to be able to practice Judaism without hindrance. He was even asked to be the first president of the newly established State of Israel, but he declined. He did NOT believe in displacing the indigenous Palestinians. He was abhorred by the activities of the Zionist terrorist groups (especially the "Stern" and "Irgun") operating in Palestine in the years prior to 1948.

Along with 27 other prominent Jews of the day, he co-wrote and signed an "Open Letter" which was printed in the New York Times urging Americans to not be deceived by the newly evolved Zionist "Freedom" party of Menachem Begin. That letter is reproduced in full after the text of Jack Bernstein's book.

Additionally, there are excerpts from The Official Report of the United States Army Intelligence, 2nd Bureau as printed in the "The British Guardian" on February 13th, 1925 along with excerpts from the article itself. The topic was the mounting concern of the United States regarding the encroaching threat of the distinctly Zionist International Bankers who had financed the Bolshevik revolution and were launching a global communist campaign.

IMPORTANT: To gain clarity in fully grasping the difference between Judaism and Zionism, an absolutely CRITICAL distinction, read the FREE, 77 page, online publication "The Rabbis Speak Out" provided by Neturei Karta - "Anti-Zionists of Israel" at www.nkusa.org

Benjamin H. Freedman came from a wealthy Jewish family in New York City. At one time, he was the principle owner of the Woodbury Soap Company. He was intimately acquainted with Bernard Baruch, Samuel Untermeyer, Woodrow Wilson, Franklin Roosevelt, Joseph Kennedy, and John F. Kennedy (whom he admired) to name just a few. He dedicated himself and his considerable fortune to exposing the Zionist tyranny he believed was enslaving the U.S. covertly through political and religious channels. His speech before a prominent military organization in Washington, D.C. in 1974 (at the request of Colonel Curtis B. Dall, former son-in-law of FDR) is reproduced in its entirety and sheds considerable light on the accusations against the Zionists by Jack Bernstein and Albert Einstein Also included, is the infamous "Call to Action" Benjamin Freedman references in his speech. It was first issued by attorney and International Zionist spokesman, Samuel Untermeyer, in 1933 over radio station WABC and reprinted the following day in full in the New York Times. The complete text is reproduced following the Freedman speech. Untermeyer had just returned from Europe and was urging Jews and Christians worldwide to boycott all German made goods and any merchants who sold them - adjuring them to join with him in a "Holy War." Many scholars are convinced that it was this strategy which ignited Hitler's most brutal and barbaric tactics against the Jews. Contained in the speech, is Untermeyer's extreme disapproval of the wealthy Jews who were actually financing Hitler's atrocities against their own people. He could not comprehend WHY they would do such a thing. Bottom line, there is no Jewish conspiracy! But there is a Zionist conspiracy and it is imperative for you to know the difference and how it is effecting the politics and financials in the United States. PLEASE don't choose ignorance. We're running out of time.