They: What Muslims and Non-Muslims Get Wrong About Each Other (Hardcover) 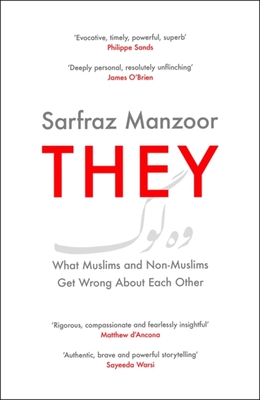 They: What Muslims and Non-Muslims Get Wrong About Each Other (Hardcover)

A powerful and deeply personal exploration of a divided country - and a hopeful vision for change.

'This is not another book about the relationship between Muslims and non-Muslims. It is THE book. . . . Absolutely not to be missed.' - Matthew d'Ancona

Sarfraz Manzoor grew up in a working-class Pakistani Muslim family in Luton - where he was raised to believe that they were different, they had an alien culture and they would never accept him. They were white people.

In today's deeply divided Britain we are often told they are different, they have a different culture and values and they will never accept this country. This time they are Muslims.

Weaving together history, reportage and memoir, Sarfraz Manzoor journeys around Britain in search of the roots of this division - from the fear that Islam promotes violence, to the suspicion that Muslims wish to live segregated lives, to the belief that Islam is fundamentally misogynistic.

THEY is also Manzoor's search for a more positive future. We hear stories from Islamic history of a faith more tolerant and progressive than commonly assumed, and stories of hope from across the country which show how we might bridge the chasm of mutual mistrust.

THEY is at once fiercely urgent, resolutely hopeful and profoundly personal. It is the story of modern, Muslim Britain as it has never been told.

Sarfraz Manzoor is a journalist, author and broadcaster. He has written and presented documentaries for BBC radio and television, and is a regular columnist for the Guardian, Sunday Times Magazine and Times. His first book, Greetings from Bury Park, was published to critical acclaim. In 2019, it was adapted for the big screen and released around the world under the name Blinded by the Light.

He lives in London and is married with two children and a cat called Socks.

This is not another book about the relationship between Muslims and non-Muslims. It is THE book. With rigour, compassion, and fearless insight Sarfraz Manzoor explores this long-contested terrain to triumphant and often moving effect. Absolutely not to be missed.—Matthew d'Ancona

An absolutely essential and inspiring read. This excellent book is filled with stories of hope and optimism we rarely hear but which need to be told.—Nazir Afzal

Sarfraz Manzoor is a gifted writer and They is the thoughtful, personal and hopeful read we all need right now.—Matt Forde

Sarfraz Manzoor has taken up the challenge of trying to promote understanding in our segregated society. He succeeds magnificently. This book is enlightening, analytical and even inspiring but above all it's a thoroughly entertaining read.—Alan Johnson

An urgent exploration of issues about which everyone has opinions but precious few have proper knowledge. Manzoor employs a journalist's brain and a storyteller's heart to redress this imbalance through a seamless blend of investigation, examination and memoir. Deeply personal and resolutely unflinching, he manages to be both insider and outsider while providing crucial perspectives on some of the most pungent social and cultural divisions of our age. I finished They with more knowledge than I started, more understanding and, crucially, more hope.—James O?Brien