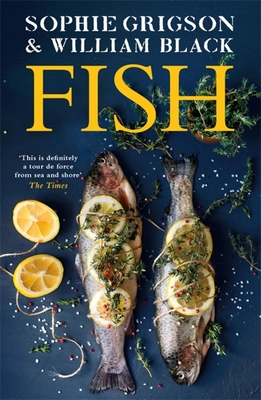 By Sophie Grigson, William Black (With)

'Initially I was surprised by just how little time it takes to cook fish. Sometimes seconds will do, and you seldom need to spend more than a few minutes when cooking a fillet of fish. Yes, precision is vital to avoid overcooking, but quite honestly there is no great mystery to it.'

Originally published in 1998 and shortlisted for the Best Food Book in the 1999 Glenfiddich Food and Drink Awards, FISH has now been fully updated by Sophie Grigson.

In FISH, Sophie creates accessible modern-day recipes for both the novice and the experienced cook. From Halibut with Welsh Rarebit Crust and Maryland Crabcakes, to Greek Octopus and Red Wine Stew and Lobster Thermidor, there are recipes for all tastes - plus helpful tips on buying, storing and preparing fish from William Black.

This is the only book you will ever need on fish and fish cookery.

Sophie Grigson is a cook, food writer and television presenter with over 20 books to her name and nine television series for BBC, Channel 4 and UKTV Food. She has also written columns and articles for the Evening Standard, Independent, Sunday Times, Country Living, BBC Good Food and Waitrose Food Illustrated. As well as raising her children, she also ran her cookery school in Oxford and presented television shows for The Travel Channel. On impulse, after interviewing Russell Norman about his book, Venice, in 2019 she sold or gave away the majority of her belongings and packed herself into her small car to move to Puglia in the south of Italy, where she now lives and runs a catering company called Trulli Delicious.

William Black, an expert on matters piscine, supplied fish to many of the UK's top restaurants. Sadly, William passed away in 2014.

If you love fish but are unsure on how to cook it, then you'll love this book... fully of tasty recipes from all over the world—Rooms & Living

A joy to dip into in and outside of the kitchen...—THE TIMES

This is sure to become one of the mainstays of the kitchen book shelf.—HOUSE & GARDEN

A terrific and inspirational book...—THE MIRROR