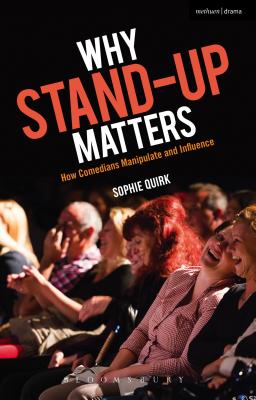 
Not On Our Shelves—Ships in 1-5 Days
(This book cannot be returned.)
Funny, lively and unpredictable, stand-up comedy is above all a medium to be enjoyed. Popular as a good night out and packing the TV schedules, stand-up permeates British society and culture.

Ubiquitous though it is, we are generally reluctant to consider comedy's social consequences. When comedians offend we seem ready to consider the potential for stand-up to do some wider harm, yet we rarely consider the good that it might do.

This book looks at the social and political impact of stand-up comedy in both its positive and negative forms. Drawing on exclusive interviews with comedians such as Stewart Lee, Josie Long, Joe Wilkinson and Mark Thomas, and examples of comic material on everything from revolution, terrorism and homosexuality, to knitting and the inefficiency of the home shower, it explores comedy's role in determining our attitudes and opinions. While revealing the conventions comics use to manage audience response, Sophie Quirk demonstrates how comedy audiences allow themselves to be manipulated, and the potential harm - and real benefits - that may arise from 'just' being funny.
Dr Sophie Quirk is Lecturer in Drama at the University of Kent, UK, where she teaches stand-up comedy and popular performance.