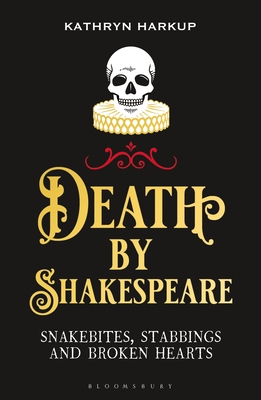 William Shakespeare found dozens of different ways to kill off his characters, and audiences today still enjoy the same reactions – shock, sadness, fear – that they did more than 400 years ago when these plays were first performed. But how realistic are these deaths, and did Shakespeare have the knowledge to back them up?

In the Bard's day death was a part of everyday life. Plague, pestilence and public executions were a common occurrence, and the chances of seeing a dead or dying body on the way home from the theatre were high. It was also a time of important scientific progress. Shakespeare kept pace with anatomical and medical advances, and he included the latest scientific discoveries in his work, from blood circulation to treatments for syphilis. He certainly didn't shy away from portraying the reality of death on stage, from the brutal to the mundane, and the spectacular to the silly.

Elizabethan London provides the backdrop for Death by Shakespeare, as Kathryn Harkup turns her discerning scientific eye to the Bard and the varied and creative ways his characters die. Was death by snakebite as serene as Shakespeare makes out? Could lack of sleep have killed Lady Macbeth? Can you really murder someone by pouring poison in their ear? Kathryn investigates what actual events may have inspired Shakespeare, what the accepted scientific knowledge of the time was, and how Elizabethan audiences would have responded to these death scenes. Death by Shakespeare will tell you all this and more in a rollercoaster of Elizabethan carnage, poison, swordplay and bloodshed, with an occasional death by bear-mauling for good measure.

Kathryn Harkup is a former chemist turned author. She writes and gives regular public talks on the disgusting and dangerous side of science. Her first book was the international best-seller A is for Arsenic: The Poisons of Agatha Christie, which was shortlisted for a Mystery Readers International Macavity Award and a BMA Book Award. She has also written Making the Monster: The Science of Mary Shelley's Frankenstein, Death by Shakespeare: Snakebites, Stabbings and Broken Hearts, and her latest book, Licence to Kill: The Science of James Bond.

“Harkup serves a delectable stew of history, science and wit that is sure to sate the appetite of any Anglophile.” —Booklist

“Fans of the Bard are sure to devour this, but even those with only a passing familiarity with Shakespeare's oeuvre will find Harkup's survey tough to resist.” —Publishers Weekly, starred review

“The author of A Is for Arsenic and Making the Monster: The Science Behind Mary Shelley's Frankenstein continues her macabre cultural musings with an immensely readable roundup of Shakespearean death.” —Smithsonian