Aesop’s Animals: The Science Behind the Fables (Hardcover) 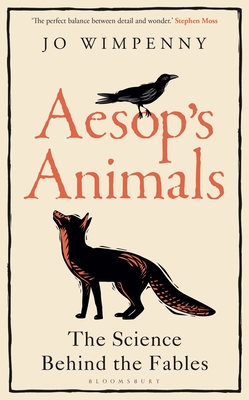 Aesop’s Animals: The Science Behind the Fables (Hardcover)

A critical look at the beloved fables that investigates whether there is any scientific truth to Aesop's portrayal of his animals.

Despite being conceived over two-and-a-half thousand years ago, Aesop's Fables are still passed from parent to child today, and are embedded in our collective consciousness. The morals still inform our judgments, but have they influenced our views of the animal protagonists as well? And, if so, is there any truth behind the stereotypes? Are crows smart enough to reason? Are pigeons so dumb they cannot tell the difference between painting and reality? Are ants truly capable of looking ahead to the future and planning their actions?

In Aesop's Animals, zoologist Jo Wimpenny turns a critical eye to the fables and ask whether there is any scientific truth to Aesop's portrayal of his animals. She brings the tales into the twenty-first century, introducing the latest scientific research on some of the most fascinating topics in animal behavior. Each chapter focuses on a different fable and a different topic in ethology, including future planning, tool use, self-recognition, cooperation and deception. At the end of each chapter, the author pulls together the evidence to assess whether Aesop's portrayal of the animals holds true from a modern, scientific perspective.

Through interviews with leading researchers in the behavioral ecology, this book brings these famous tales back to life. People are always fascinated by animal behavior, especially studies that suggest the presence of intelligence and other 'human-like' characteristics that reveal how we may share more with these creatures than we ever imagined. Aesop's Animals builds on this, revealing cutting-edge research findings about animal abilities, as well as enabling the reader to explore and challenge their own preconceived notions about the animal kingdom.

Jo Wimpenny is a zoologist and writer, with a research background in animal behavior and the history of science. She is a regular feature writer for BBC Wildlife.

“Come for the fables and stay for the behavioral research in this jam-packed but delightful collection … Aesop's Animals is both an intense and playful look at how humans - storytellers and scientists alike - consider the mysteries inside the creatures with whom we share this planet.” —Scientific American

“Engaging and comprehensive, this is highly readable popular science.” —Hannah Beckerman, The Observer

“Every once in a publisher's blue moon, along comes a book so simple and original in its concept that it verges on brilliance and 1,000 science and nature writers howl: "Why did we not think of it?" Such is Aesop's Animals by zoologist Jo Wimpenny, which does precisely what it says on the lid: it puts the anthropomorphic fables of Aesop under the electron microscope of modern science. […] a clever cadastral survey of animal behavioural studies.” —Country Life

"I simply couldn't put it down. The clever ways in which Wimpenny weaves in current scientific facts about topics including future planning, tool use, self-recognition, cooperation, and deception with Aesop's lessons was spellbinding." - Psychology Today

"Wimpenny has the knack for bringing interesting research to life with anecdotes without obscuring the more significant challenges of determining just what animals can do and what they may be thinking." - Wellbeing International

“Wimpenny pumps life into the hard science and keeps her discussions accessible, offering plenty of insight into how humans interpret the natural world.” —Publishers Weekly