Japan's Musical Tradition: Hogaku from Prehistory to the Present (Paperback) 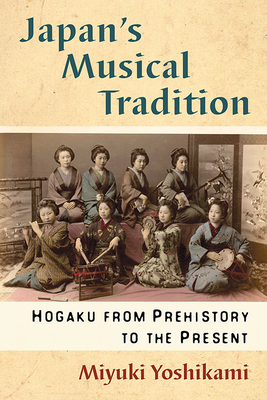 Japan's Musical Tradition: Hogaku from Prehistory to the Present (Paperback)


Special Order—Subject to Availability
What makes Japanese music sound Japanese? Each genre of Japan's pre-Western music (hogaku) morphed from the preceding one with singing at its foundation. In ancient Shinto prayers, words of power recited in a prescribed cadence communicated veneration and community needs to the divine spirit (kami). From the prayers, Japan's word-based music evolved into increasingly more sophisticated recitations with biwa, shamisen, and koto accompaniment. This examination reveals shortcomings in the typical interpretation of Japanese music from a pitch-based Western perspective and carefully explores how the quintessential musical elements of singing, instrumental accompaniment, scale, and format were transmitted from their Shinto inception through all of Japan's music. Japan's culture, with its unique iemoto system and teaching methods, served to exactly replicate Japan's music for centuries. Considering Japan's music in the context of its own culture, logic, and sources is essential to gaining a clear understanding and appreciation of Japan's music and dissipating the mystery of the music's Japaneseness. Greater enjoyment of the music inevitably follows.
Miyuki Yoshikami taught Honors courses on the Japanese performing arts at the University of Maryland and at the Gettysburg College Music Department. She has performed professionally on the koto at the National Cathedral and with the National Symphony Orchestra at the Kennedy Center. She gives performance lectures at many venues, including the Freer Gallery. She teaches the koto privately and lives in Bethesda, Maryland.