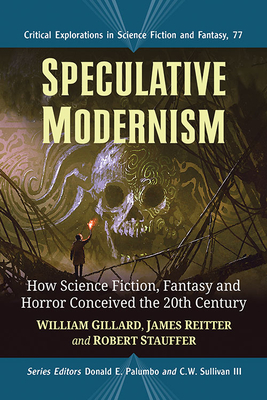 
Not On Our Shelves—Ships in 1-5 Days
Speculative modernists--that is, British and American writers of science fiction, fantasy and horror during the late 19th and early 20th centuries--successfully grappled with the same forces that would drive their better-known literary counterparts to existential despair. Building on the ideas of the 19th-century Gothic and utopian movements, these speculative writers anticipated literary Modernism and blazed alternative literary trails in science, religion, ecology and sociology. Such authors as H.G. Wells and H.P. Lovecraft gained widespread recognition--budding from them, other speculative authors published fascinating tales of individuals trapped in dystopias, of anti-society attitudes, post-apocalyptic worlds and the rapidly expanding knowledge of the limitless universe. This book documents the Gothic and utopian roots of speculative fiction and explores how these authors played a crucial role in shaping the culture of the new century with their darker, more evolved themes.
William Gillard teaches creative writing and literature at the University of Wisconsin Oshkosh and is the author of six books. He lives in Appleton, Wisconsin. James Reitter is an associate professor of English and film studies at Dominican College of Blauvelt in Orangeburg, New York. He publishes poetry in magazines and journals. Robert Stauffer specializes in medieval and Renaissance literature at Dominican College of Blauvelt in Orangeburg, New York. He has published science-fiction and articles on baseball.