Dodgers!: An Informal History from Flatbush to Chavez Ravine (Paperback) 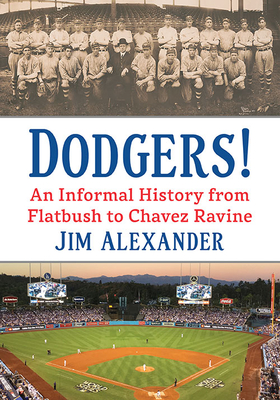 Dodgers!: An Informal History from Flatbush to Chavez Ravine (Paperback)


Not On Our Shelves—Ships in 1-5 Days
In the 1880s, a Brooklyn baseball manager plotted to steal pitching signs and alert batters with a hidden electrical wire. In 1951, the Brooklyn Dodgers were robbed of a pennant via a sign-stealing scheme involving a center field office, a telescope and a button connected to the bullpen phone. In 2019, the Los Angeles Dodgers were robbed of a World Series championship via a sign-stealing system involving a TV camera, a monitor, a trash can and a bat. History has often repeated itself around the Dodgers franchise. From their beginnings as the Brooklyn Atlantics to their move from Flatbush to L.A. and into the 21st Century, the Dodgers and have seen heartbreaking losses and stirring triumphs, broken the color barrier, turned the game into a true coast-to-coast sport and produced many Hall of Famers, This is their story.
Jim Alexander is a sports columnist for the Southern California News Group, which includes the Los Angeles Daily News and Orange County Register, and has covered sports in Southern California for more than four decades, including the Dodgers as a beat for 12 seasons and frequent columns about them in the years since.