The Poisoned Island: A Novel (Paperback) 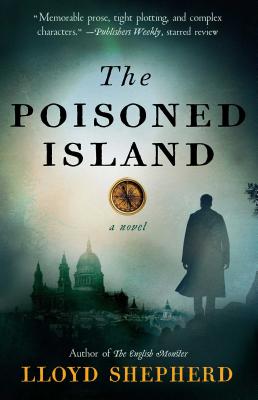 The Poisoned Island: A Novel (Paperback)


Not On Our Shelves—Ships in 1-5 Days
A brilliant young police officer discovers a series of bizarre deaths are connected to the cargo of a research vessel bound for Kew Gardens in this fantasy-tinged historical thriller set in early nineteenth-century London.

Tahiti 1769. English sailors arrive on the shores of the Polynesian paradise— a place of staggering beauty where magic and ancient myths still hold sway. But they soon devastate the island with disease, war, and death, planting deadly seeds that will be carried back to England forty years later.

London 1812. On a gray June morning, the Solander docks, her hold containing hundreds of exotic plants from Tahiti for the King’s Gardens at Kew. The apparently successful expedition soon takes a horrifying— and inexplicable—turn: The crew of the Solander starts dying one by one. Thames River Police Chief Charles Horton can find no signs of murder or suicide to explain the deaths, and the ship’s surviving crew seems intent on hampering his investigation. When one of the plants begins to show frightening changes, it is up to Charles Horton to determine how it might be stopped.
Lloyd Shepherd has worked for the past twelve years as a senior executive in the Internet business, holding senior management positions at Yahoo, The Guardian, Channel 4, and the BBC. Before his online career, Lloyd was a journalist covering the film and TV business for Financial Times and Variety. The English Monster is his first novel.
“A spirited evocation of an era when roving botanists could also be blithe sexual predators, and 'savages' could be both admired and exploited... Georgian London is vividly brought to life... A gutsy, involving yarn.”
— The Guardian

“Shepherd adroitly blurs fact and fiction with a hint of the fantastic, creating his own superior blend of historical crime fiction.”
— The Financial Times

“Pulls you in… Clever… Shepherd delivers the goods.”
— Kirkus Reviews