The Tangled Tree: A Radical New History of Life (Paperback) 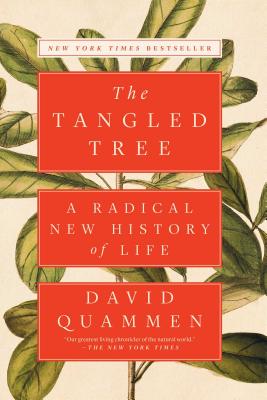 The Tangled Tree: A Radical New History of Life (Paperback)


Not On Our Shelves—Ships in 1-5 Days
In this New York Times bestseller and longlist nominee for the National Book Award, “our greatest living chronicler of the natural world” (The New York Times), David Quammen explains how recent discoveries in molecular biology affect our understanding of evolution and life’s history.

In the mid-1970s, scientists began using DNA sequences to reexamine the history of all life. Perhaps the most startling discovery to come out of this new field—the study of life’s diversity and relatedness at the molecular level—is horizontal gene transfer (HGT), or the movement of genes across species lines. It turns out that HGT has been widespread and important; we now know that roughly eight percent of the human genome arrived sideways by viral infection—a type of HGT.

In The Tangled Tree, “the grandest tale in biology….David Quammen presents the science—and the scientists involved—with patience, candor, and flair” (Nature). We learn about the major players, such as Carl Woese, the most important little-known biologist of the twentieth century; Lynn Margulis, the notorious maverick whose wild ideas about “mosaic” creatures proved to be true; and Tsutomu Wantanabe, who discovered that the scourge of antibiotic-resistant bacteria is a direct result of horizontal gene transfer, bringing the deep study of genome histories to bear on a global crisis in public health.

“David Quammen proves to be an immensely well-informed guide to a complex story” (The Wall Street Journal). In The Tangled Tree, he explains how molecular studies of evolution have brought startling recognitions about the tangled tree of life—including where we humans fit upon it. Thanks to new technologies, we now have the ability to alter even our genetic composition—through sideways insertions, as nature has long been doing. “The Tangled Tree is a source of wonder….Quammen has written a deep and daring intellectual adventure” (The Boston Globe).
David Quammen’s books include Breathless, The Tangled Tree, The Song of the Dodo, The Reluctant Mr. Darwin, and Spillover, a finalist for the National Book Critics Circle Award and recipient of the Premio Letterario Merck, in Rome. He has written for The New Yorker, Harper’s Magazine, The Atlantic, National Geographic, and Outside, among other magazines, and is a three-time winner of the National Magazine Award. Quammen shares a home in Bozeman, Montana, with his wife, Betsy Gaines Quammen, author of American Zion, and with two Russian wolfhounds, a cross-eyed cat, and a rescue python. Visit him at DavidQuammen.com.
“[Quammen] is our greatest living chronicler of the natural world. . . .There are vivacious descriptions on almost every page."
— Parul Sehgal

“David Quammen’s diligently researched and deeply considered overview of what’s been going on recently in evolutionary biology is illuminating, wondrous, and gripping. Also scary when it comes to thinking about the evolution of Homo sapiens. This is stunning, first-rate journalism.”
— Barry Lopez, author of Arctic Dreams

“There's no one who writes about complex science better than David Quammen. The Tangled Tree is at once fascinating, illuminating, and totally absorbing.”
— Elizabeth Kolbert, author of the Pulitzer Prize-winning The Sixth Extinction

“Quammen has written a deep and daring intellectual adventure. . . . The Tangled Tree is much more than a report on some cool new scientific facts. It is, rather, a source of wonder.”
— Thomas Levenson

“David Quammen proves to be an immensely well-informed guide to a complex story. . . . Indeed he is, in my opinion, the best natural history writer currently working. Mr. Quammen’s books . . . consistently impress with their accuracy, energy and superb, evocative writing."
— David Barash

"In The Tangled Tree, celebrated science writer David Quammen tells perhaps the grandest tale in biology. . . . He presents the science — and the scientists involved — with patience, candour and flair."
— John Archibald

"A lively account of how new genetic research is upending the fundamental history of life."
— Andrea Thompson

"In David Quammen’s new page turner, The Tangled Tree: A Radical New History of Life, the author reveals how new molecular techniques have come to revolutionize the way we understand evolutionary processes and how we classify life into coherent groups. In an accessible style that has won him accolades in the past, Quammen does a marvelous job of weaving together the scientific and human story of this revolution. . . . Quammen has once again crafted a delightful read on a complex and important subject."
— Ivor T. Knight

"One of the central insights in Charles Darwin's theory of evolution was that life branched like a tree. And one of the revolutionary discoveries of molecular biology over a century later was that the tree of life was, in fact, a far more complex maze of branches. In The Tangled Tree, David Quammen offers the definitive chronicle of this profound development in our understanding of the history of life."
— Carl Zimmer, author of She Has Her Mother's Laugh and Parasite Rex

“A masterful history of a new field of molecular biology . . . . [An] impressive account of perhaps the most unheralded scientific revolution of the 20th century. . . . A consistently engaging collection of vivid portraits of brilliant, driven, quarrelsome scientists in the process of dramatically altering the fundamentals of evolution, illuminated by the author's insightful commentary.”
— Kirkus Reviews (starred review)

"[Quammen] explores important questions and makes the process as well as the findings understandable and exciting to lay readers. . . . This book also proves its author's mastery in weaving various strands of a complex story into an intricate, beautiful, and gripping whole."
— Publishers Weekly (starred review)

“[Quammen] writes like the director of a summer blockbuster: blasts of rich detail, quick cuts, not a second wasted.”
— Lois Beckett