The Secret Diplomacy of the Vietnam War: The Negotiating Volumes of the Pentagon Papers (Paperback) 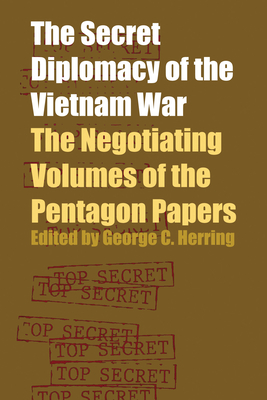 The Secret Diplomacy of the Vietnam War: The Negotiating Volumes of the Pentagon Papers (Paperback)

In 1971 RAND consultant Daniel J. Ellsberg made national news by handing over to the New York Times a top secret Pentagon study on the Vietnam War. Publication of the Pentagon Papers rocked the American defense establishment and fanned the flames of the growing antiwar protest movement in the United States.

By late that year, most of the Pentagon Papers had been released to the public. Four volumes, however, were held back, Ellsberg himself conceding their special sensitivity. These so-called negotiating volumes deal with the diplomacy of the war between 1964 and 1968. Published in book form with extensive commentary, they provide an indispensable source for the study of diplomacy during the Vietnam conflict.

These documents cover thirteen major peace contacts and initiatives that took place during the presidency of Lyndon Johnson. They furnish a wealth of new information about the American bombing pauses of May 1965 and January 1966; several third-party peace initiatives; and a still virtually unknown 1965 contact, mysteriously called “xyz,” between North Vietnamese and American diplomats in Paris. They afford the most complete documentation yet available of the Polish-sponsored peace move codenamed “marigold” and the abortive peace initiative launched early in 1967 by British Prime Minister Wilson and Soviet Premier Kosygin.

The utility of this important book is greatly enhanced by Herring’s extensive annotation, highly informative introductory essays, and helpful glossaries.

George C. Herring is Professor Emeritus of History at the University of Kentucky.