The First Letter from New Spain: The Lost Petition of Cortés and His Company, June 20, 1519 (Paperback) 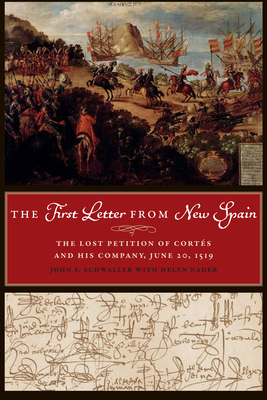 The First Letter from New Spain: The Lost Petition of Cortés and His Company, June 20, 1519 (Paperback)

The founding of la Villa Rica de la Veracruz (the rich town of the True Cross) is prominently mentioned in histories of the conquest of Mexico, but scant primary documentation of the provocative act exists. During a research session at the Spanish archives, when John Schwaller discovered an early-sixteenth-century letter from Veracruz signed by the members of Cortés’s company, he knew he had found a trove of historical details. Providing an accessible, accurate translation of this pivotal correspondence, along with in-depth examinations of its context and significance, The First Letter from New Spain gives all readers access to the first document written from the mainland of North America by any European, and the only surviving original document from the first months of the conquest.

The timing of Cortés’s Good Friday landing, immediately before the initial assault on the Aztec Empire, enhances the significance of this work. Though the expedition was conducted under the authority of Diego Velázquez, governor of Cuba, the letter reflects an attempt to break ties with Velázquez and form a strategic alliance with Carlos V, the Holy Roman Emperor and King of Spain. Brimming with details about the events surrounding Veracruz’s inception and accompanied by mini-biographies of 318 signers of the document—socially competitive men who risked charges of treason by renouncing Velázquez—The First Letter from New Spain gives evidence of entrepreneurship and other overlooked traits that fueled the conquest.

John F. Schwaller is a distinguished historian of colonial Latin America. He has served as Director of the Academy of American Franciscan History at the Franciscan School of Theology in Berkeley, California; Associate Provost and Associate Vice President for Academic Affairs at the University of Montana, Missoula; Vice Chancellor for Academic Affairs and Dean at the University of Minnesota, Morris; and President of SUNY Potsdam. His previous books include The History of the Catholic Church in Latin America: From Conquest to Revolution and Beyond.

Helen Nader was Emeritus Professor of History at the University of Arizona. She was the author of numerous books, including Power and Gender in Renaissance Spain: Eight Women of the Mendoza Family, 1450–1650 and Liberty in Absolutist Spain: The Habsburg Sale of Towns, 1516–1700.

From the moment that I opened The First Letter from New Spain to its conclusion, I found myself ridiculously excited about the material. . . . Schwaller does a good job in his effort to place the founding of the town within the context of the events surrounding it. Further, by organizing the book in the way that they do and focusing on all known signatories, Schwaller and Nader lessen the exceptionalism of the top conquistadores and demonstrate the very real plight and dangers that awaited the conquistadores at the bottom ranks of the group. At the end of the monograph, and this review, I find myself just as excited about it as when I started. I believe that the book will appeal to scholars, students, and the general public alike.
— Hispanic American Historical Review