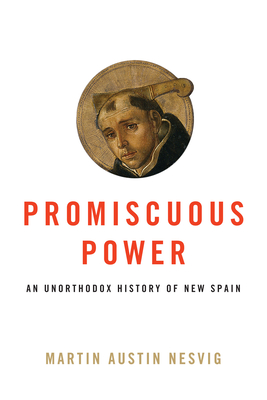 Scholars have written reams on the conquest of Mexico, from the grand designs of kings, viceroys, conquistadors, and inquisitors to the myriad ways that indigenous peoples contested imperial authority. But the actual work of establishing the Spanish empire in Mexico fell to a host of local agents—magistrates, bureaucrats, parish priests, ranchers, miners, sugar producers, and many others—who knew little and cared less about the goals of their superiors in Mexico City and Madrid. Through a case study of the province of Michoacán in western Mexico, Promiscuous Power focuses on the prosaic agents of colonialism to offer a paradigm-shifting view of the complexities of making empire at the ground level.

Presenting rowdy, raunchy, and violent life histories from the archives, Martin Austin Nesvig reveals that the local colonizers of Michoacán were primarily motivated by personal gain, emboldened by the lack of oversight from the upper echelons of power, and thoroughly committed to their own corporate memberships. His findings challenge some of the most deeply held views of the Spanish colonization of Mexico, including the Black Legend, which asserts that the royal state and the institutional church colluded to produce a powerful Catholicism that crushed heterodoxy, punished cultural difference, and ruined indigenous worlds. Instead, Nesvig finds that Michoacán—typical of many frontier provinces of the empire—became a region of refuge from imperial and juridical control and formal Catholicism, where the ordinary rules of law, jurisprudence, and royal oversight collapsed in the entropy of decentralized rule.

Martin Austin Nesvig is a professor of history at the University of Miami. He is the author of Ideology and Inquisition: The World of the Censors in Early Mexico and editor of three volumes on religion in Mexico, including Religious Culture in Modern Mexico and Forgotten Franciscans: Writings from an Inquisitional Theorist, a Heretic, and an Inquisitional Deputy.

New World historians and others have long recognized disparities between what was decreed by the Spanish Crown and what was actually carried out on the ground. In this book Nesvig substantiates what many of us have long suspected: distance and time allowed for some pretty nefarious characters to operate under the proverbial radar.
— SMRC Revista

Aptly Rabelaisian, dense, and intellectually rigorous…[Promiscuous Power] recontextualizes so many classics of New Spanish history, that this reader will never teach the history of the sixteenth century in the same way again.
— Estudious Interdisciplinarios de América Latina y el Caribe

Rarely does the nature of the sources match the voice of an author as it does in Nesvig's Promiscuous Power…I found Nesvig's stylistic and historiographical irreverence both refreshing and powerful.
— Not Even Past

Nesvig shows great knowledge of the literature and sources. The cleverly arranged book illuminates a whole array of—primarily religious—agents and factors that determined local rule [in New Spain]…[Promiscuous Power is a] well-written book which not only contains genuinely entertaining stories but also very important insights into the quotidian colonial struggle for power and survival.
— Journal of Social History

A welcome addition to the scholarship on colonial Mexico…The author's careful and detailed research reveals a debilitating rivalry between secular clerics and the religious orders, an Inquisition that fails to frighten most residents in the region, rural towns that sheltered convicted felons, and even priests who behaved more like caudillos than pious community leaders.
— American Historical Review

[Promiscuous Power] is a significant entry in the historiography dedicated to undoing the mythic imagery of a monolithic, overly centralized Spanish empire…this is an important book that makes the overtly optimistic see just how brutal, personal, and petty power can be...In our own era of decentralization and personalized expressions of power, Promiscuous Power is a book that resonates and disturbs.
— Sixteenth Century Journal

[Promiscuous Power] brings sixteenth-century Michoacán to life in a way that few others have done...Promiscuous Power succeeds in cramming a lot of lust, murder and ambition into its 200-odd pages. Part serious colonial history, part bodice-ripper, part paean to its geographical setting, it lays out a rich spread of colonial life that delights the reader on every page.
— Journal of Latin American Studies

[A] compelling and eminently readable study...Nesvig’s attention to narrative is one of the pleasures of the book. Always a fine writer, the author offers material worthy of Gabriel García Márquez...Nesvig renders his subjects in language that combines erudition and precision with utter vulgarity, all of it rooted in the sources (and translated with citations that make the author’s choices transparent and defensible)...Funny in passages, readable throughout, and a tragedy in the end, this book is a tour de force and a major contribution to our understanding of the individual decisions, passions, and rivalries that constituted colonial rule.
— Ethnohistory

This superb volume deserves a place on the short list of books on colonial Latin America that one can give undergraduates, graduate students, professional scholars, and nonacademic friends and expect each to derive both pleasure and profit from it...The writing throughout is excellent...Scholars of colonial Mexico, the Spanish empire, and comparative borderlands should read Promiscuous Power and assign it to students at all levels.
— Hispanic American Historical Review