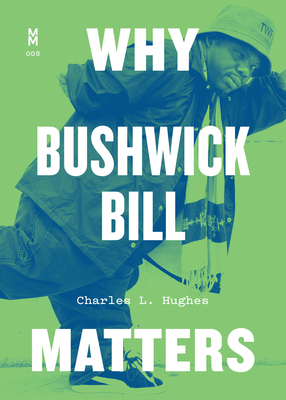 In 1989 the Geto Boys released a blistering track, “Size Ain’t Shit,” that paid tribute to the group’s member Bushwick Bill. Born with dwarfism, Bill was one of the few visibly disabled musicians to achieve widespread fame and one of the even fewer to address disability in a direct, sustained manner. Initially hired as a dancer, Bill became central to the Geto Boys as the Houston crew became one of hip-hop’s most important groups.

Why Bushwick Bill Matters chronicles this crucial artist and explores what he reveals about the relationships among race, sex, and disability in pop music. Charles L. Hughes examines Bill's recordings and videos (both with the Geto Boys and solo), from the horror-comic persona of “Chuckie” to vulnerable verses in songs such as “Mind Playing Tricks On Me,” to discuss his portrayals of dwarfism, addiction, and mental illness. Hughes also explores Bill’s importance to his era and to the longer history of disability in music. A complex figure, Bill exposed the truths of a racist and ableist society even as his violent and provocative lyrics put him in the middle of debates over censorship and misogyny. Confrontational and controversial, Bushwick Bill left a massive legacy as he rhymed and swaggered through an often-inaccessible world.

Charles L. Hughes is the director of the Lynne and Henry Turley Memphis Center at Rhodes College. He is the author of Country Soul: Making Music and Making Race in the American South, which Rolling Stone named one of the “Best Music Books of 2015,” as well as numerous articles that have appeared in a variety of publications.
The Bushwick Bill story is complex, more complex than a batch of controversial lyrics and a record cover would suggest...Why Bushwick Bill Matters does that complexity justice, and gives a Houston hip-hop legend his due.
— Houstonia

[Hughes is] expert at interweaving music criticism, cultural history, disability studies, and a touch of personal reflection [in Why Bushwick Bill Matters]. Hughes is well-studied and acutely informed on race and music.
— Rain Taxi

Why Bushwick Bill Matters is invaluable for its examination of how race, gender, and disability shaped Bushwick Bill’s contributions to hip-hop culture and to the music industry...Hughes proves that Scarface was not the only member of the Geto Boys to have a lasting impact on hip-hop music. Bushwick Bill deserves that distinction, too.
— Journal of Popular Music Studies

This small, well-considered, deeply felt, and often very funny volume is invaluable in the continued discourse of difficult people making difficult work, which seems necessary for the continued, spiky, and difficult possibility of disabled selfhood and expression.
— Canadian Journal of Disability Studies