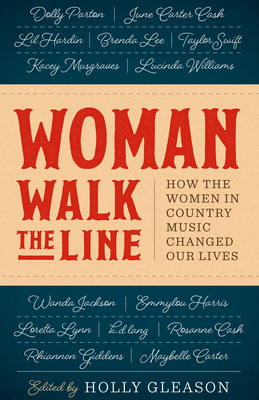 Full-tilt, hardcore, down-home, and groundbreaking, the women of country music speak volumes with every song. From Maybelle Carter to Dolly Parton, k.d. lang to Taylor Swift—these artists provided pivot points, truths, and doses of courage for women writers at every stage of their lives. Whether it’s Rosanne Cash eulogizing June Carter Cash or a seventeen-year-old Taylor Swift considering the golden glimmer of another precocious superstar, Brenda Lee, it’s the humanity beneath the music that resonates.

Part history, part confessional, and part celebration of country, Americana, and bluegrass and the women who make them, Woman Walk the Line is a very personal collection of essays from some of America’s most intriguing women writers. It speaks to the ways in which artists mark our lives at different ages and in various states of grace and imperfection—and ultimately how music transforms not just the person making it, but also the listener.

Holly Gleason is a music critic, academic, and artist development consultant. Her work has appeared in Rolling Stone, the Los Angeles Times, the New York Times, HITS, Musician, CREEM, the Oxford American, No Depression, and Paste.

Not only will readers find some of the finest music writing in the business here, but they’ll also learn how the musicians’ evolution influenced each essayist’s own creative process. The result? Incredibly empowering writing about what it means to be an artist and a human being. . . .Woman Walk the Line will touch readers to their cores — reminding them of their first musical loves and the difference between a musician and a star.
— Nashville Scene

Each of the 27 essays focuses on the experience of when music was a savior, an inspiration or an acknowledgment of a deep and personal truth.
— New York Times

...a new collection of personal essays on the transformative impact of women in country music aims to change the narrative.
— The Washington Post

Much has happened to shape the national discourse in the 18 months since Holly Gleason began working on Woman Walk The Line...Much has happened in the last 18 days to make it essential reading.
— Fort Lauderdale Sun-Sentinel