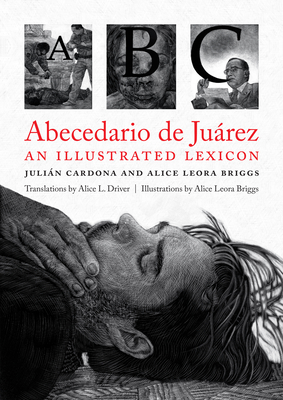 
In Stock—Click for Locations
Juárez, Mexico, is known for violence. The femicides of the 1990s, and the cartel mayhem that followed, made it one of the world's most dangerous cities. Along with the violence came a new lexicon that traveled from person to person, across rivers and borders—wherever it was needed to explain the horrors taking place. From personal interviews, media accounts, and conversations on the street, Julián Cardona and Alice Leora Briggs have collected the words and slang that make up the brutal language of Juárez, creating a glossary that serves as a linguistic portrait of the city and its violence. Organized alphabetically, the entries consist of Spanish and Spanglish, accompanied by short English definitions. Some also feature a longer narrative drawn from interviews—stories that put the terms in context and provide a personal counterpoint to media reports of the same events. Letters, and many of the entries, are supplemented with Briggs’s evocative illustrations, which are reminiscent of Hans Holbein’s famous Alphabet of Death. Together, the words, drawings, and descriptions in ABCedario de Juárez both document and interpret the everyday violence of this vital border city.
Julián Cardona (1960–2020) was an acclaimed photographer based in Juárez, Mexico. He was a correspondent for Reuters, and his images have been published in Harper's, Aperture, El Diario de Juárez, and El Fronterizo. Alice Leora Briggs is an artist and the recipient of a Guggenheim fellowship. She collaborated with Charles Bowden on Dreamland: The Way Out of Juárez.
An unconventional and fully illustrated, alphabetical account of an era in which border citizens in conflict zones used words, shortcuts, and stories to process relentless waves of violence…Working together, [Cardona and Briggs] created a moving melange of observations and illustrations of life and death on the border that make the experience of reading Abecedario something like visiting an important exhibit at an art museum...This is not a book to be read in a single sitting. It’s at once a history book, a reference book, and an indictment of the militarization of the border by the Mexican government and of the government’s continuing failure to end enduring violence...This book is often hard to read. And yet there’s magic here too: In some ways, Cardona returns to life on these richly illustrated pages.
— Texas Observer