Breaks in the Air: The Birth of Rap Radio in New York City (Paperback) 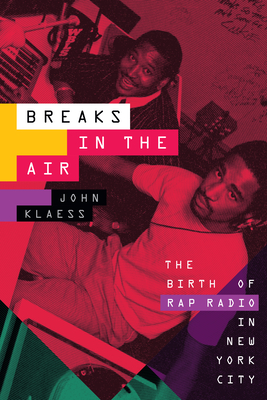 Breaks in the Air: The Birth of Rap Radio in New York City (Paperback)


On Our Shelves Now at:
In Breaks in the Air John Klaess tells the story of rap's emergence on New York City's airwaves by examining how artists and broadcasters adapted hip hop's performance culture to radio. Initially, artists and DJs brought their live practice to radio by buying time on low-bandwidth community stations and building new communities around their shows. Later, stations owned by New York's African American elite, such as WBLS, reluctantly began airing rap even as they pursued a sound rooted in respectability, urban sophistication, and polish. At the same time, large commercial stations like WRKS programmed rap once it became clear that the music attracted a demographic that was valuable to advertisers. Moving between intimate portraits of single radio shows and broader examinations of the legal, financial, cultural, and political forces that indelibly shaped the sound of rap radio, Klaess shows how early rap radio provides a lens through which to better understand the development of rap music as well as the intertwined histories of sounds, institutions, communities, and legal formations that converged in the post-Civil Rights era.
John Klaess is an independent scholar based in Boston.