Haiti's Paper War: Post-Independence Writing, Civil War, and the Making of the Republic, 1804-1954 (America and the Long 19th Century #25) (Paperback) 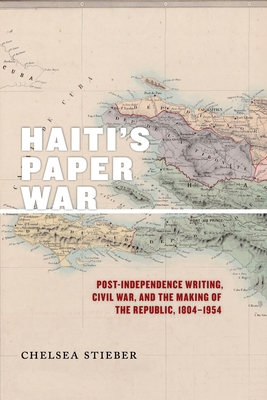 Haiti's Paper War: Post-Independence Writing, Civil War, and the Making of the Republic, 1804-1954 (America and the Long 19th Century #25) (Paperback)

Picking up where most historians conclude, Chelsea Stieber explores the critical internal challenge to Haiti's post-independence sovereignty: a civil war between monarchy and republic. What transpired was a war of swords and of pens, waged in newspapers and periodicals, in literature, broadsheets, and fliers. In her analysis of Haitian writing that followed independence, Stieber composes a new literary history of Haiti, that challenges our interpretations of both freedom struggles and the postcolonial. By examining internal dissent during the revolution, Stieber reveals that the very concept of freedom was itself hotly contested in the public sphere, and it was this inherent tension that became the central battleground for the guerre de plume--the paper war--that vied to shape public sentiment and the very idea of Haiti. Stieber's reading of post-independence Haitian writing reveals key insights into the nature of literature, its relation to freedom and politics, and how fraught and politically loaded the concepts of "literature" and "civilization" really are. The competing ideas of libert , writing, and civilization at work within postcolonial Haiti have consequences for the way we think about Haiti's role--as an idea and a discursive interlocutor--in the elaboration of black radicalism and black Atlantic, anticolonial, and decolonial thought. In so doing, Stieber reorders our previously homogeneous view of Haiti, teasing out warring conceptions of the new nation that continued to play out deep into the twentieth century.
Chelsea Stieber is Associate Professor of French and Francophone Studies at the Catholic University of America. She is co-editor of the forthcoming critical translation Haiti for the Haitians and a 2020 ACLS Fellow.