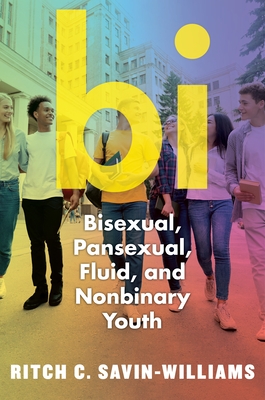 Despite the increasing visibility of LGBTQ people in American culture, our understanding of bisexuality remains superficial, at best. Yet, five times as many people identify as bisexual than as gay or lesbian, and as much as 25 percent of the population is estimated to be bisexual. In Bi, noted scholar of youth sexuality, Ritch Savin-Williams, brings bisexuality to centerstage at a moment when Gen Z and millennial youth and young adults are increasingly rejecting traditional labels altogether. Drawing on interviews with bisexual youth from a range of racial, ethnic, and social class groups, he reveals to us how bisexuals define their own sexual orientation and experiences-in their own words. Savin-Williams shows how and why people might identify as bisexual as a result of their biology or upbringing; as a bridge or transition to something else; as a consequence of their curiosity; or for a range of other equally valid reasons. With an understanding that sexuality and romantic attachments are often influx, Savin-Williams offers us a way to think about bisexuality as part of a continuum. He shows that many of the young people who identify as bisexual often defy traditional views, dispute false notions, and reimagine sexuality with regard to both practice and identity. Broadly speaking, he shows that many young people experience a complex, nuanced existence with multiple sexual and romantic attractions as well as gender expressions, which are seldom static but fluctuate over their lives. Savin-Williams provides an important new understanding of bisexuality as an orientation, behavior, and identity. Bi shows us that bisexuality is seen and embraced as a valid sexual identity more than ever before, giving us timely and much-needed insight into the complex, fascinating experiences of bisexual youth themselves.
Ritch C. Savin-Williams is Professor Emeritus of Developmental Psychology at Cornell University and the author of many books, including Mostly Straight: Sexual Fluidity Among Men and The New Gay Teenager. He is a licensed clinical psychologist, and has appeared on Good Morning America, C-SPAN About-Books, All Things Considered, CBS Newsradio, CNN, BBC, Voice of America and others.