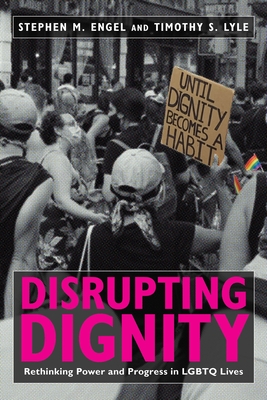 Why LGBTQ+ people must resist the seduction of dignity

In 2015, when the Supreme Court declared that gay and lesbian couples were entitled to the "equal dignity" of marriage recognition, the concept of dignity became a cornerstone for gay rights victories. In Disrupting Dignity, Stephen M. Engel and Timothy S. Lyle explore the darker side of dignity, tracing its invocation across public health politics, popular culture, and law from the early years of the HIV/AIDS crisis to our current moment. With a compassionate eye, Engel and Lyle detail how politicians, policymakers, media leaders, and even some within LGBTQ+ communities have used the concept of dignity to shame and disempower members of those communities. They convincingly show how dignity--and the subsequent chase to be defined by its terms--became a tool of the state and the marketplace thereby limiting its more radical potential. Ultimately, Engel and Lyle challenge our understanding of dignity as an unquestioned good. They expose the constraining work it accomplishes and the exclusionary ideas about respectability that it promotes. To restore a lost past and point to a more inclusive future, they assert the worthiness of queer lives beyond dignity's limits.
Stephen M. Engel is Professor of Politics at Bates College in Maine and an Affiliated Scholar of the American Bar Foundation. He teaches courses in US constitutional law, American Political Development, and LGBTQ+ politics. He is the author of multiple books including Fragmented Citizens: The Changing Landscape of Gay and Lesbian Lives and American Politicians Confront the Courts: Opposition Politics and Changing Responses to Judicial Power. Timothy S. Lyle (they/them) is an Assistant Professor of English at Iona College. They specialize in contemporary African American literature and culture, focusing on the intersections of race, gender, sexuality, and disability. They have published work on Tyler Perry in Callaloo and Continuum, on Janet Mock in the College Language Association Journal, Callaloo, and MELUS, and on HIV/AIDS narratives in African American Review and The Journal of West Indian Literature.