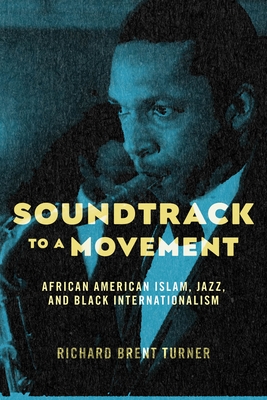 **FINALIST for the 2022 PROSE Award in Music & the Performing Arts**

**Certificate of Merit, Best Historical Research on Recorded Jazz, given by the 2022 Association for Recorded Sounds Collection Awards for Excellence in Historical Sound Research**

Explores how jazz helped propel the rise of African American Islam during the era of global Black liberation Amid the social change and liberation of the civil rights and Black Power movements, the tenor saxophonist Archie Shepp recorded a tribute to Malcolm X's emancipatory political consciousness. Shepp saw similarities between his revolutionary hero and John Coltrane, one of the most influential jazz musicians of the era. Later, the esteemed trumpeter Miles Davis echoed Shepp's sentiment, recognizing that Coltrane's music represented the very passion, rage, rebellion, and love that Malcolm X preached. Soundtrack to a Movement examines the link between the revolutionary Black Islam of the post-WWII generation and jazz music. It argues that from the late 1940s and '50s though the 1970s, Islam rose in prominence among African Americans in part because of the embrace of the religion among jazz musicians. The book demonstrates that the values that Islam and jazz shared--Black affirmation, freedom, and self-determination--were key to the growth of African American Islamic communities, and that it was jazz musicians who led the way in shaping encounters with Islam as they developed a Black Atlantic "cool" that shaped both Black religion and jazz styles. Soundtrack to a Movement demonstrates how by expressing their values through the rejection of systemic racism, the construction of Black notions of masculinity and femininity, and the development of an African American religious internationalism, both jazz musicians and Black Muslims engaged with a global Black consciousness and interconnected resistance movements in the African diaspora and Africa.
Richard Brent Turner is Professor in the Department of Religious Studies and the African American Studies Program at the University of Iowa. He is the author of Jazz Religion, The Second Line, and Black New Orleans, New Edition, and Islam in theAfrican-American Experience, Second Edition. Turner is a 2020 American Council of Learned Societies Fellow.