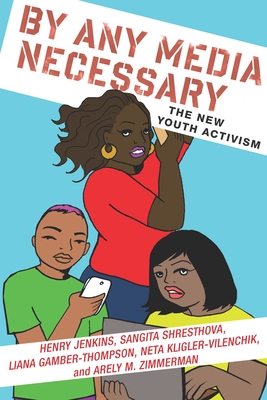 There is a widespread perception that the foundations of American democracy are dysfunctional, public trust in core institutions is eroding, and little is likely to emerge from traditional politics that will shift those conditions. Youth are often seen as emblematic of this crisis--frequently represented as uninterested in political life, ill-informed about current-affairs, and unwilling to register and vote. By Any Media Necessary offers a profoundly different picture of contemporary American youth. Young men and women are tapping into the potential of new forms of communication such as social media platforms, spreadable videos and memes, remixing the language of popular culture, and seeking to bring about political change--by any media necessary. In a series of case studies covering a diverse range of organizations, networks, and movements involving young people in the political process--from the Harry Potter Alliance which fights for human rights in the name of the popular fantasy franchise to immigration rights advocates using superheroes to dramatize their struggles--By Any Media Necessary examines the civic imagination at work. Before the world can change, people need the ability to imagine what alternatives might look like and identify paths by which change can be achieved. Exploring new forms of political activities and identities emerging from the practice of participatory culture, By Any Media Necessary reveals how these shifts in communication have unleashed a new political dynamism in American youth.

Read Online at connectedyouth.nyupress.org
Henry Jenkins (Author) Henry Jenkins is the Provost's Professor of Communication, Journalism, Cinematic Arts and Education at the University of Southern California. He is the author or editor of 20 books including Textual Poachers: Television Fans and Participatory Culture, Convergence Culture: Where Old and New Media Collide, Spreadable Media: Creating Meaning and Value in a Networked Society, and By Any Media Necessary: The New Youth Activists. He blogs at henryjenkins.org and co-hosts the podcast How Do You Like It So Far? Sangita Shresthova (Author) Sangita Shresthova is the Director of Research of Civic Paths@USC. Her previous books include By Any Media Necessary: The New Youth Activism (with Henry Jenkins et al.) and Is it All About Hips?: Around the World With Bollywood Dance. Liana Gamber-Thompson (Author) Liana Gamber-Thompson is a Program Associate at the National Writing Project and the Community Manager for Connected Learning TV. Neta Kligler-Vilenchik (Author) Neta Kligler-Vilenchik is Assistant Professor of Communication at the Hebrew University of Jerusalem. Arely Zimmerman (Author) Arely M. Zimmerman is Assistant Professor of Ethnic Studies at Mills College in Oakland, California.