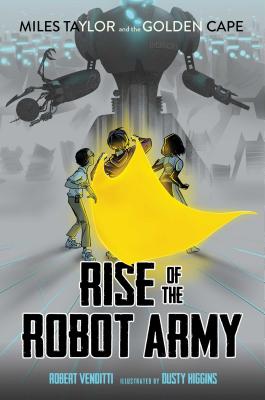 
Special Order—Subject to Availability
From New York Times bestselling author Robert Venditti comes the second book in the Miles Taylor and the Golden Cape series, about an eighth grader who finds himself unexpectedly thrust into the role of real-life superhero. His latest mission: to defeat an army of robots designed to destroy him!

Master the golden cape.
Been there.

Save the world from an alien invasion.
Done that.

Battle an army of super-deadly robots designed to destroy you.
Sure didn’t see that one coming.

After a summer of fighting crime as Gilded, the world’s only superhero, Miles Taylor is bummed to learn that nothing has changed for him at Chapman Middle School. He is still the primary target of the Jammer’s bullying. And Josie, the girl of his dreams, has put him squarely in the friend zone.

Miles starts spending more and more time as Gilded, neglecting his schoolwork and his friends. His bad attitude lands him and his best friend, Henry, in a military compound, at the mercy of the power-crazed General Breckenridge. When the general steals the golden cape, Miles finds himself back at square one with no superpowers…and no hope of escape. On the verge of losing everything—and everyone—he cares about, Miles must discover the hero within himself before the general puts his evil plans into action.
Robert Venditti is the New York Times bestselling author of numerous comics and graphic novels. He has written the monthly adventures of Green Lantern and the Flash, as well as the graphic novelizations for the Percy Jackson and the Olympians and Heroes of Olympus series. Robert lives in Atlanta, Georgia, with his wife and two children. Visit his website at RobertVenditti.com.

Dusty Higgins is an award-winning magazine and newspaper cartoonist and illustrator. He broke into comics in 2009 with Pinocchio, Vampire Slayer, chosen as one of the year's top ten graphic novels by the Young Adult Library Services Association. He has also worked on Knights of the Living Dead and Turok: Son of Stone. Dusty lives in central Arkansas. Learn more at DustyHiggins.com.
“Venditti elegantly balances action with thoughtful realistic relationship quandaries. Occasional comic book–style pages carry the story in illustrated form, breaking up the text and adding some visual spice.”
— The Bulletin of the Center for Children’s Books