Ellie and the Good-Luck Pig (The Critter Club #10) (Hardcover) 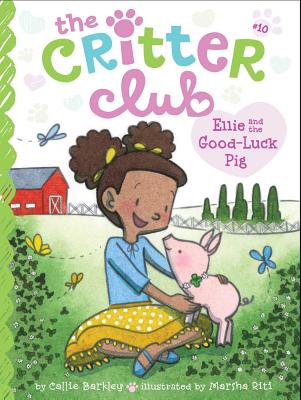 Ellie and the Good-Luck Pig (The Critter Club #10) (Hardcover)

This is book number 10 in the The Critter Club series.

When The Critter Club takes in an abandoned pig named Plum, the girls are really excited. They’ve never had a pig at the club before! They love learning how to take care of Plum. And they especially love watching Ms. Sullivan’s dog, Rufus, interact with the pig. But no one is happier about the club’s guest than Ellie.

Soon after Plum arrives, Ellie starts having some unusually good luck. She does really well on a test for her least favorite subject; she aces an audition for a play at a local theater; and she wins a prize at school! Ellie is sure that Plum is bringing her good luck. So when the rest of the girls tell Ellie that they’ve found someone to adopt the pig, Ellie knows she should be excited...but she’s not. Will Ellie’s good luck turn bad once Plum leaves?

With easy-to-read language and illustrations on almost every page, The Critter Club chapter books are perfect for beginning readers!
Callie Barkley loves animals. As a young girl, she dreamed of getting a cat or dog of her own until she discovered she was allergic to most of them. It was around this time that she realized the world was full of all kinds of critters that could use some love. She now lives with her husband and two kids in Connecticut. They share their home with exactly ten fish and a very active ant farm.