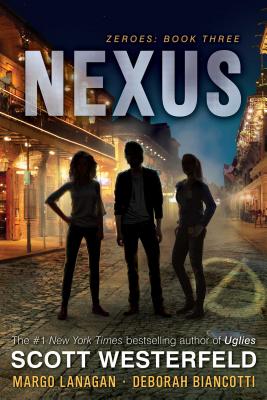 This is book number 3 in the Zeroes series.

The Zeroes are in disarray.

One of them has vanished. One of them is in prison. The rest are on the most-wanted list. And something big is brewing.

Accused of murdering Swarm, Bellwether is in a high-security prison, isolated and unable to use his powers of influence. Flicker, Crash, Mob, and Scam are on the run as suspected domestic terrorists. And Agent Phan of the FBI has a secret weapon up his sleeve—a teenager with a superpower that the Zeroes haven’t encountered yet.

After a daring breakout, the group is drawn to New Orleans, where celebrating Mardi Gras crowds promise enormous power to anyone who can channel it. There, an army of Zeroes is gathering around a charismatic leader—whose plans are nothing short of cataclysmic.

Time is running out for the Zeroes, but they must learn to trust one another again if they want to avert the looming disaster.
Scott Westerfeld is the author of the Leviathan series, the first book of which was the winner of the 2010 Locus Award for Best Young Adult Fiction. His other novels include the New York Times bestseller Afterworlds, the worldwide bestselling Uglies series, The Last Days, Peeps, So Yesterday, and the Midnighters trilogy. Visit him at ScottWesterfeld.com or follow him on Twitter at @ScottWesterfeld.

Margo Lanagan has been publishing stories for children, young adults and adult readers for twenty-five years. She has won numerous awards, including four World Fantasy Awards. Two of her books have been Michael L. Printz Honor books and she has been shortlisted for the Hugo and Nebula awards and for the Los Angeles Times Book Prize in the young adult division. Visit Margo at her blog, AmongAmidWhile.Blogspot.com, or follow her on Twitter at @MargoLanagan.

Deborah Biancotti has written two short story collections, Bad Power and A Book of Endings. She’s been nominated for the Shirley Jackson Award and the William L. Crawford Award for Best First Fantasy Book. You can find her online at DeborahBiancotti.com or on Twitter at @Deborah_B.