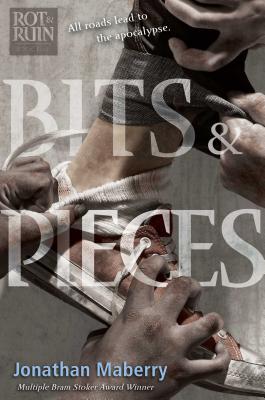 This is book number 5 in the Rot & Ruin series.

Return to the zombie apocalypse wasteland that is the Rot & Ruin in this short story collection from Jonathan Maberry.

Benny Imura’s zombie-infested adventures are well-chronicled in the gripping novels Rot & Ruin, Dust & Decay, Flesh & Bone, and Fire & Ash. But what else was happening while he was on his quest? Who were the others navigating the ravaged landscape full of zombies?

Bits & Pieces fills in the gaps about what we know about First Night, surviving the plague, and traveling the land of Rot & Ruin. Eleven all-new short stories from Nix’s journal and eleven previously published stories, including “Dead & Gone” and “Tooth & Nail,” are now together and in print for the first time, along with the first-ever script for the Rot & Ruin comic books.
Jonathan Maberry is a New York Times bestselling author, five-time Bram Stoker Award winner, and comic book writer. He writes in multiple genres including suspense, thriller, horror, science fiction, fantasy, and adventure; and he writes for adults, teens, and middle grade. His works include the Joe Ledger thrillers, Glimpse, the Rot & Ruin series, the Dead of Night series, The Wolfman, The X-Files Origins: Devil’s Advocate, Mars One, and many others. Several of his works are in development for film and TV, including V Wars, which is a Netflix original series. He is the editor of high-profile anthologies including the X-Files books, Aliens: Bug Hunt, Out of Tune, Hardboiled Horror, Baker Street Irregulars, Nights of the Living Dead, and others. He lives in Del Mar, California. Visit him at JonathanMaberry.com and on Twitter (@JonathanMaberry) and Facebook.
"[For] the zombie-apocalypse-intrigued reader, it is a welcome addition to the collection."
— Booklist

"An entertaining divergence from the solid series."
— Kirkus Reviews