A Frog in the Bog (Classic Board Books) (Board book) 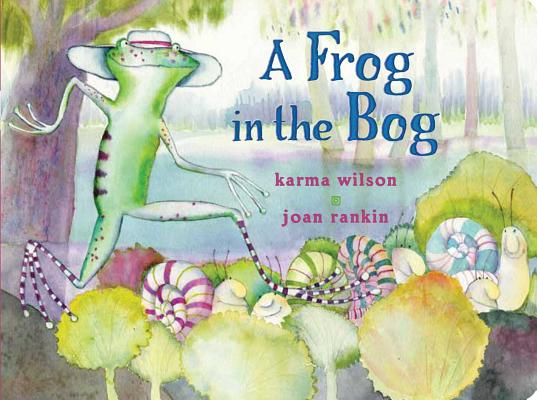 A Frog in the Bog (Classic Board Books) (Board book)


Not On Our Shelves—Ships in 1-5 Days
This lyrical and playful read-aloud from the author of New York Times bestselling Bear Snores On is now available in a Classic Board Book edition.

There’s a small green frog on a half-sunk log in the middle of the bog. He eats one tick, two fleas, three flies, four slugs, and five snails. And the frog gets a whole lot bigger.

Then a hungry gator shows up, ready to eat the big fat frog. The frog opens his mouth wide to scream and out comes everything he’s eaten! And the frog gets a whole lot smaller.

Now available as a Classic Board Book, this rhythmic and humorous story that counts from one to five is perfect for the youngest of readers.
Karma Wilson is the bestselling author of several picture books, including the Bear Books series; Where Is Home, Little Pip?; and A Dog Named Doug. Karma lives in Montana.

Joan Rankin has illustrated more than twenty-five books for children. She received the South African HAUM Dann Retief Prize for Children’s Book Illustration in 1986 and the Katrina Harris Award for Children’s Book Illustration in 1991. Books she has illustrated include A Frog in the Bog by Karma Wilson and Off to First Grade by Louise Borden. She lives with her husband and three daughters in Johannesburg, South Africa.