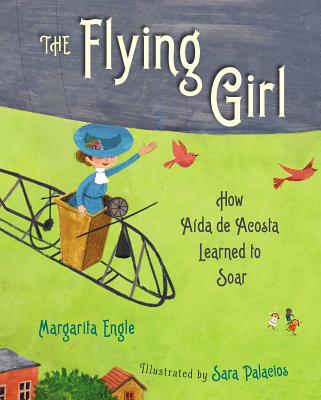 
In Stock—Click for Locations
In this beautiful picture book filled with soaring words and buoyant illustrations, award-winners Margarita Engle and Sara Palacios tell the inspiring true story of Aída de Acosta, the first woman to fly a motorized aircraft.

On a lively street in the lovely city of Paris, a girl named Aída glanced up and was dazzled by the sight of an airship. Oh, how she wished she could soar through the sky like that! The inventor of the airship, Alberto, invited Aída to ride with him, but she didn’t want to be a passenger. She wanted to be the pilot.

Aída was just a teenager, and no woman or girl had ever flown before. She didn’t let that stop her, though. All she needed was courage and a chance to try.
Margarita Engle is the Cuban American author of many books including the verse novels Rima’s Rebellion; Your Heart, My Sky; With a Star in My Hand; The Surrender Tree, a Newbery Honor winner; and The Lightning Dreamer. Her verse memoirs include Soaring Earth and Enchanted Air, which received the Pura Belpré Award, a Walter Dean Myers Award Honor, and was a finalist for the YALSA Award for Excellence in Nonfiction, among others. Her picture books include Drum Dream Girl, Dancing Hands, and The Flying Girl. Visit her at MargaritaEngle.com.

Sara Palacios is the recipient of a Pura Belpré Illustrator Honor for Marisol McDonald Doesn’t Match and the illustrator of several other picture books, including A Song of Frutas, The Flying Girl, and Martina Has Too Many Tías. Sara graduated with a degree in graphic design and went on to earn BFA and MFA degrees in illustration from the Academy of Art in San Francisco. A native of Mexico, Sara now lives in San Francisco. Visit her at SaraPalaciosIllustrations.com.
* "A beautiful account of a young woman who knew that all she needed to reach her dream was courage and a chance to try."
— Kirkus Reviews, Starred Review

"A great resource for STEM classrooms and readers interested in historical figures who paved the way for modern day pioneers."
— School Library Journal

“Playful language with intermittent rhymes and repetition results in an enjoyable easy-to-read biography for young children of a little-known historical figure . . . De Acosta’s determination in making her dream come true serves as an inspiration to young girls: they can soar in whatever endeavor they choose to pursue.”
— Booklist

“Writing in upbeat, intermittently rhyming verse, . . . Engle delivers a sweetly uplifting story about a girl who ‘only needed courage and a chance to try.’”
— Publishers Weekly

"This story based on the life of a Latina air-and-space pioneer is a welcome addition to the growing list of picture-book biographies of women who defied expectations.”
— The Horn Book